Our father among the saints Tikhon of Moscow (Russian: Святитель Тихон, Патриарх Московский и всея Руси) (1865–1925), Enlightener of North America, was Patriarch of Moscow and All Russia (1917–1925).

While in America, he established his cathedral in New York City, and presided over a vast archdiocese, encouraging and authorizing many publications in the English language. Among these, he encouraged the translation of the Eastern liturgy into English by Isabel Florence Hapgood, and he wrote an extensive catechism based on the Nicene Creed and the Our Father. His feast day is celebrated on April 7 by New Calendar churches, on March 25 by Old Calendar churches; his glorification is celebrated on September 26, and he is also commemorated on the feast of the New Martyrs and Confessors of Russia, celebrated on the Sunday nearest to January 25, which was the date of the martyrdom of Metropolitan Vladimir of Kiev, the first Bishop of the new martyrs.

St. Tikhon (né Vasily Ivanovich Bellavin; Russian: Василий Иванович Беллавин) was born on January 19, 1865. His father was Ioann Bellavin, a rural priest of the Toropetz district of the Pskov diocese. "From his early years he displayed a particular religious disposition, love for the Church as well as rare meekness and humility. ... From 1878 to 1883, Vasily studied at the Pskov Theological Seminary. ... His fellow students liked and respected him for his piety, brilliant progress in studies, and constant readiness to help comrades, who often turned to him for explanations of lessons, especially for help in drawing up and correcting numerous compositions. Vasily was called 'bishop' and 'patriarch' by his classmates." [1]

After returning to Russia in 1907, he continued to win the affection of thousands with his humble piety and loving affection. During World War I, he charitably aided displaced citizens, who flocked to him. He was also honored on November 5, 1917 by being elected Patriarch of the Russian Orthodox Church. St. Tikhon had to overcome much disunity within the Church. 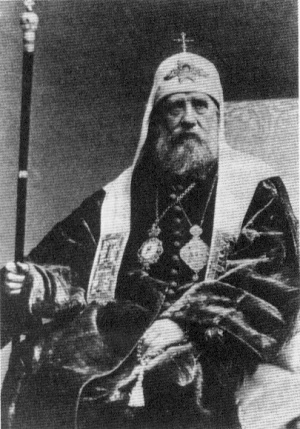