His Eminence the Most Reverend Metropolitan Platon (Rozhdestvensky) of New York was primate of the Russian Metropolia (the former name of the OCA) twice, from 1907 to 1914 and then from 1922 to his death on April 20, 1934. A controversial figure, he presided over the declaration of "temporary self-government" for the Metropolia in 1924 and over the creation of the short-lived American Orthodox Catholic Church in 1927. 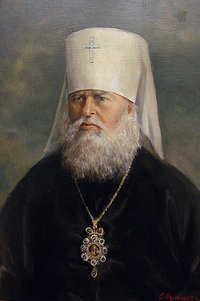 Platon was born Porphyry Theodorovich Rozhdestvensky on February 23, 1866, the son of a parish priest in the Kursk Eparchy of Russia. He attended the Kursk Theological Seminary and married. He was ordained to the priesthood in 1887 and was assigned as a village priest in Lukashevsky. His wife soon gave birth to a daughter, but within five years he became a widower.

He then entered the Kiev Theological Academy, graduating in 1895. He took monastic vows in 1894, receiving the name Platon. He served as an assistant professor and instructor of Moral Theology while he continued his studies, and in 1898, he received a Master of Theology degree. Hieromonk Platon was named inspector at the Kiev Academy and was raised to the rank of archimandrite. He was named rector of the Kiev Academy in 1902 and was consecrated bishop, serving as second vicar of the Kiev diocese. 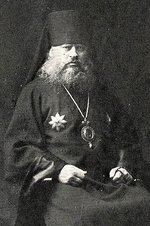 Metr. Platon during his first term in the US

In 1907, he was transferred to the North American diocese, arriving on September 5, 1907. Reacting to the needs of the diocese he welcomed more Carpatho-Russian Uniates back to Orthodoxy and addressed social services by founding the Russian Immigrants Home and an orphanage in New York City. He also transferred the Metropolia seminary from Minneapolis, Minnesota to Tenefly, New Jersey to bring it closer to its main source of students and to the church administration.

In 1914, he was transferred to the diocese of Kishniece and Khotin, leaving America on May 20, 1914, but in 1915 he became exarch of Georgia and served until early 1917 when the Church of Georgia restored its autocephaly. In March 1917, he was appointed a member of the Holy Synod of the Church of Russia. He served in 1915 in the Second State Duma, and before the revolution of 1917, he was appointed Metropolitan of Kherson and Odessa. With the defeat of the White Army by the Bolsheviks he was forced to leave Odessa for Europe and eventually America.

With Metr. Platon's return to the United States in 1921 and Abp. Alexander's return to Europe, the Third All-American Sobor (Council) in Pittsburgh, Pennsylvania, in September 1923 elected Metr. Platon as the ruling bishop of the North American diocese. Although this election was confirmed by the Russian Church, Metr. Platon would spend over the next decade great effort maintaining the unity of the diocese, particularly against attacks by the Living Church, fending off financial crisis, and sporadic cooperation and disjunction with the Russian Orthodox Church Outside Russia (ROCOR). With the breakdown in communications with the Church in Russia, he felt compelled to declare the North American diocese temporarily autonomous. This was done by the Fourth All-American Sobor held in Detroit, Michigan in February 1924. At this council Metr. Platon also received the title Metropolitan of All America and Canada, while simultaneously earning himself the indictment of the ROCOR, which came fully to a head two years later. In a ROCOR synod meeting in 1926 in Karlovtsy, Serbia, Platon was asked by his fellow hierarchs on the synod to renounce the "temporary self-government" which his jurisdiction had declared. When he refused, the ROCOR bishops condemned the Detroit sobor as "extremely dangerous and harmful for the interestes of the Russian Church in America."

In January of the following year, Platon convened another sobor in America, which labelled the ROCOR as "uncanonical." One Metropolia bishop dissented, Apollinary (Koshevoy), and he was subsequently expelled from the Metropolia. The ROCOR synod then deposed Platon as primate of the Metropolia and appointed Apollinary in his place, who had some success, persuading 62 parishes to accept his authority in the six years of his reign. 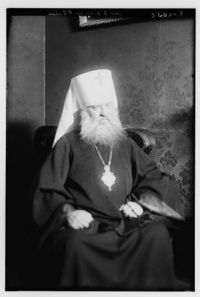 In 1927, Platon, free of the strictures of both the Moscow Patriarchate and the ROCOR synod, attempted to form an autocephalous Orthodox Church in North America by blessing the creation of the American Orthodox Catholic Church, whose constitution gave it authority over all Orthodox Christians living on the continent and was led by Aftimios Ofiesh, Archbishop of Brooklyn. The new jurisdiction collapsed on itself in a matter of six or seven years, however, as Platon soon withdrew his support in the wake of internal pressures and conflicts as well as external pressures from the Episcopal Church U.S.A., which felt that the new church constituted competition with it (the Episcopalians regarded themselves as the "senior Orthodox church" in the US). Additionally, when Aftimios chose to contract a civil marriage, all legitimacy which the new jurisdiction retained was erased in the eyes of mainstream Orthodoxy.

Platon announced in 1929 that he would be willing to accept ROCOR authority again if the synod would in return recognize him as Metropolia primate instead of Apollinary. When the synod denied his terms, Platon went on a legal campaign to seize parishes and properties throughout North America from Apollinary's authority. Most of the court cases he brought forward failed.

In 1933, Platon rejected the request by Metr. Sergius (Stragorodsky) (locum tenens of the Moscow Patriarchate) to pledge "loyalty" to the Soviet regime (though that "loyalty" was mainly described by MP representatives in terms of not engaging in anti-Soviet political activism). In response, Moscow declared Platon to be in schism, deposing him before an ecclesiastical court and forming the Russian Exarchate of North America, whose bishop was regarded by Russia at that time as being the rightful canonical successor of Russian jurisdiction in America.

After his death in 1934, he was buried at the cemetery at St. Tikhon's Orthodox Monastery (South Canaan, Pennsylvania), and the ROCOR lifted its ban against the Metropolia as a goodwill gesture, leading to renewal of relations in 1935 with Platon's successor, Metr. Theophilus (Pashkovsky).