From OrthodoxWiki
(Redirected from Koliva)
Jump to: navigation, search 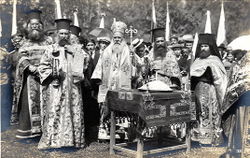 Postcard, undated (ca.1916), showing an Orthodox service with the blessing of Kollyva.

Kollyva (Greek: Κολλυβα, (kólliva); Serbian: кољиво, (koljivo); Romanian: colivă ; Bulgarian: коливо, (kolivo); Ukrainian and Russian: Kutya (or Kutia)) is an offering of boiled wheat that is blessed liturgically in connection with the Memorial Services in Church for the benefit of one's departed, thereby offering unto God, as it were, a sacrifice of propitiation (atonement) for the dead person, and in honor of the Sovereign Lord over life and death.[1]

While recipes may vary widely, the primary ingredient in today's Kollyva consists of wheat kernels which have been boiled until they are soft. These are usually mixed with a variety of ingredients which may include pomegranate seeds, sesame seeds, almonds, ground walnuts, cinnamon, sugar, raisins, anise and parsley.

The Kollyva mixture is then placed on a platter and shaped into a mound or cake, to resemble a grave. The whole is then decorated with a powdered sugar covering, often with Jordan almonds, raisins, or other sweets decoratively placed on the surface. A cross is traced or created with the sweets on the top, and on its sides are placed the initials of the departed for whom the memorial is held. A candle, often placed in the center of the Kollyva, is lit at the beginning of the requiem service and extinguished at its end; the candle symbolizes the light wherewith the Christian is illumined in Baptism, and also the light of the world to come, which knows no setting.

Some Orthodox parishes have a designated individual charged with making the Kollyva. This is in part due to the health risk of fermented wheat if the Kollyva is not prepared correctly.

Sometimes Kollyva is made with rice instead of wheat. This custom began as a practical response to a famine that occurred in Soviet Russia, when the faithful did not have wheat available for Kollyva, so they used rice instead. Some communities continue to use rice for their Kollyva to this day. In the Japanese Orthodox Church where rice is mainly eaten, Kollyva is commonly made from rice sweetened with sugar and decorated with raisins, without reference to famine.

The size and decoration of the platter varies according to the time elapsed from the date of death. The fortieth day memorial service is the most important which practically no Orthodox neglects to hold for the repose of the soul of their beloved. This ritual food is blessed after the memorial Divine Liturgy, performed at various intervals after a death. The Kollyva are then distributed to the congregation after the service, who in return say "may God forgive his soul!".

It is also customary for the priest to pour wine, oil, and some of the Kollyva onto the grave site at the cemetery, following the Memorial Service in church.[note 1]

The origin of the religious use of Kollyva predates Christianity. The word stems from the Ancient Greek word κόλλυβo (kollyvo), which originally meant cereal grain.

The Ancient Greek first fruits offerings (or dedications) known as panspermia,[note 2] consisted of a mixture of cooked seeds and nuts (Pulse) which were offered during the festival of the Anthesteria.

The Anthesteria[note 3] was one of the four Athenian festivals in honour of Dionysus (collectively the Dionysia), held annually for three days, from the eleventh to the thirteenth of the month of Anthesterion (February-March). The festival predates the Ionian colonisation of the early eleventh century B.C.,[note 4] making it the oldest datable part of the Eleusinian Mysteries. Although its name indicates a Festival of Flowers (anthos), the festival focused primarily on opening the new wine and on placating the spirits of the dead. According to Swedish classical scholar Martin P. Nilsson, writing in 1940:

"The custom has been taken over by the Greek Church. The panspermia is offered to the dead on the modern Greek All Souls' Day, the Psychosabbaton, which is celebrated in the churchyards before Lent or before Whitsunday. It is offered as first fruits on various occasions, but especially at the harvest and at the gathering of the fruit. It is brought to the church, blessed by the priest, and eaten in part, at least, by the celebrants. This modern panspermia varies according to the seasons and consists of grapes, loaves, corn, wine, and oil. Candles are fixed in the loaves, and there are candlesticks with cups for corn, wine, and oil, which have been compared to the ancient kernos. The usual modern name of these offerings is kollyba , which signified in late antiquity as well as in modern times an offering of cooked wheat and fruit. The word appears also in descriptions of ecclesiastical usages from the Middle Ages. Very seldom can the continuity of a cult usage be followed through the ages as this one can. These popular customs, which belong to the oldest and, as some say, the lowest stratum of religion, are the most long-lived of all."[2]

Wheat, like barley, was also associated with the Egyptian cult of Osiris. Grain was planted in the ground on the same day traditionally commemorating the death of the god,[note 5] while the germinating seed symbolized Osiris rising from the dead.

The association between death and life, between that which is planted in the ground and that which emerges, is deeply embedded in the making and eating of Kollyva. The ritual food passed from paganism to early Christianity in Byzantium and later spread to the entire Orthodox world.

The tradition of blessing and eating Kollyva at the end of the first week of Great Lent is connected with an event in the reign of Julian the Apostate in 362 AD. The tradition states that the Emperor knew that the Christians would be hungry after the first week of strict fasting, and would go to the marketplaces of Constantinople on Saturday, to buy food. Therefore he ordered that blood from pagan sacrifices be sprinkled over all the food that was sold there, making it "polluted sacrificial food" (food "polluted" with the blood of idolatry), in an attempt to force upon the people the paganism of which he was an ardent supporter.

However St. Theodore the Tyro appeared in a dream to the Patriarch of Constantinople Eudoxios, ordering him to inform all the Christians that no one should buy anything at the market, but rather to boil the wheat (already called Kollyva) that they had at home and eat it sweetened with honey.

As a result, this first Saturday of Great Lent has come to be known as Theodore Saturday. After the service, the Kollyva is distributed to all who are present and, after Holy Communion and the antidoron, is the first food eaten after the strict fasting of the first week.

Since then Kollyva, having become connected with celebrating the memory of saints, are brought to church and are ordained by the priest during memorial prayers known today as Memorial Services.

The Kollyva are symbolic of the resurrection of the dead on the day of the Second Coming of the Lord. St. Paul said, "what you sow does not come to life unless it dies" (I Corinthians 15:36), and St. John, "unless a grain of wheat falls into the earth and dies, it remains alone; but if it dies, it bears much fruit" (John 12:24).

Thus, as the wheat is buried in the soil and disintegrates without really dying but is later regenerated into a new plant that bears much more fruit than itself, so the Christian's body will be raised again from the very corruptible matter from which it is now made; however, it will be raised not in its previous fleshy substance but in an incorruptible essence which "will clad the mortal body with an immortal garment", in the words of St. Paul (I Corinthians 15:53).

The Kollyva then, symbolize the Apostolically rooted hope in the resurrection of the dead as the only eventuality that gives meaning and attains the longed perfection on the part of the individual who takes his life to be a divinely ordained meaningful living forever.[3]

The 16th century Archbishop Gabriel of Philadelphia[note 6] wrote that the Kollyva are symbols of the general resurrection, and the several ingredients added to the wheat signify so many different virtues.[4]

During memorial services (requiem services), the family or friends of the departed will often prepare a Kollyva which is placed in front of the memorial table before which the service is chanted, while submitting a list of first names of the deceased loved ones to the priest. Memorial services are served on the third, ninth, and fortieth days after the repose of an Orthodox Christian, as well as on the one-year anniversary.

In addition, there are several Soul Saturdays (Psychosabbaton) during the church year, including the two Saturdays prior to Great Lent, the first Saturday of Great Lent, and the Saturday before Pentecost, during which general commemorations are made for all the departed, as well as on Radonitsa, the second Tuesday after Pascha.

These prescribed times are still observed in most Orthodox places.

It is also customary in the Slavic practice on the feast of the Patron Saint of a church or of a family, or on the feast of saints of special significance to offer Kollyva. Instead of serving a memorial service, the Kollyva is set in front of an icon of the saint and a Moleben is served to that saint.

There is also a practice on Mount Athos whereby the icons of saints are incorporated onto the surface of the Kollyva offerings made in their honour.