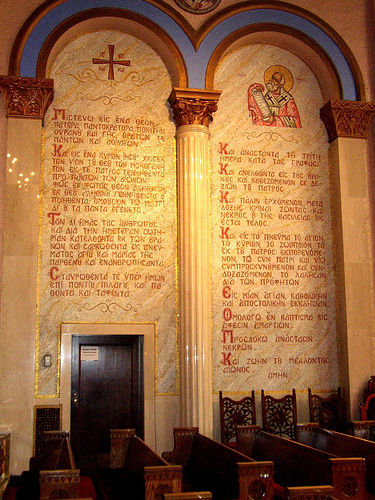 The Nicene-Constantinopolitan Creed (also called the Nicene Creed, the Symbol of Faith, the Pistevo, or simply the Creed) is that creed formulated at the First and Second Ecumenical Councils. It was defined by the Holy Fathers of those first two councils (held in Nicea and Constantinople, respectively) to combat various heresies: notably Arianism, Apollinarianism, Macedonianism (also called Pneumatomachianism), and Chiliasm.

Some scholars believe that the Creed promulgated by the First Ecumenical Council was based on an earlier baptismal creed used in Palestine (the Apostles' Creed), while others regard its more likely origin as being a creed issued early in A.D. 325 in Antioch, a so-called "Syrian Creed."

The Creed as it now stands was formed in two stages, and the one in use today in the Orthodox Church reflects the revisions and additions made at the Second Ecumenical Council. Some centuries later, the Roman Catholic Church attempted a unilateral revision of the Creed by the addition of the Filioque, thus being one of the causes of the Great Schism between Rome and the rest of the Church.

The Coptic church has a tradition that the Nicene Creed was authored by St. Athanasius of Alexandria, whose theology was instrumental at the Nicene council, despite his being only a deacon at the time.

We believe in one God, the Father almighty, maker of all things, visible and invisible;

And in one Lord Jesus Christ, the Son of God, begotten from the Father, only-begotten, that is, from the essence of the Father, God from God, light from light, true God from true God, begotten not made, of one essence with the Father, through Whom all things came into being, things in heaven and things on earth, Who because of us men and because of our salvation came down and became incarnate, becoming man, suffered and rose again on the third day, ascended to the heavens, and will come again to judge the living and the dead;

And in the Holy Spirit.

We believe in one God, the Father Almighty, Maker of heaven and earth, and of all things visible and invisible;

And in one Lord Jesus Christ, the Son of God, the Only-begotten, Begotten of the Father before all ages, Light of Light, Very God of Very God, Begotten, not made; of one essence with the Father; by whom all things were made:

Who for us men and for our salvation came down from heaven, and was incarnate of the Holy Spirit and the Virgin Mary, and was made man;

And was crucified also for us under Pontius Pilate, and suffered and was buried;

And the third day He rose again, according to the Scriptures;

And ascended into heaven, and sits at the right hand of the Father;

And He shall come again with glory to judge the living and the dead, Whose kingdom shall have no end.

And we believe in the Holy Spirit, the Lord, and Giver of Life, Who proceeds from the Father, Who with the Father and the Son together is worshipped and glorified, Who spoke by the Prophets;

And we believe in one, holy, catholic, and apostolic Church.

We acknowledge one Baptism for the remission of sins.

We look for the Resurrection of the dead,

And the Life of the age to come. Amen.

Note: The Nicene-Constantinopolitan Creed as it is recited in Orthodox worship today uses the first person ("I believe..."/"Πιστεύω") rather than the first person plural as it was enacted at the councils.

The word "again" after "On the third day..." Does not appear in the Greek version, nor in the Latin translation, used by the Roman Catholic Church.