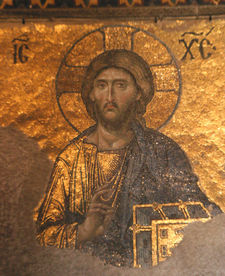 Incarnation is the act of clothing with flesh, or the state of being so clothed; the act of taking, or being manifested in, a human body and nature. Used by itself, the word refers to the fact that in Jesus, God took on flesh and became man. God, the Son, has truly lived and died and risen from the dead in the flesh, as a true human being.

The Orthodox doctrine of Christ incarnate is:

From the Nicene-Constantinopolitan Creed: "... and He was incarnate of the Holy Spirit and the Virgin Mary and became man."

In the early Christian era many divisions broke out concerning the true nature of Christ. Christians believed that He was the Son of God. But how was He both Son of God and truly man?

The final definitions of the Incarnation and the nature of Jesus were made by the early Church at the Council of Ephesus and the Council of Chalcedon. These councils declared that Jesus was both fully God, begotten from the Father; and fully man, taking His flesh and human nature from the Theotokos. These two natures, human and divine, were hypostatically united into the one personhood of Jesus Christ.

The doctrine was reaffirmed and clarified by the Fifth Ecumenical Council, called by the Byzantine Emperor Justinian in the sixth century.

Because of the Monothelite Controversy, the Sixth Ecumenical Council (Constantinople 680-681) had to further reaffirm and clarify the doctrine.

The Incarnation itself is a major reason why the Church encourages the use of icons. Defenders of the veneration of the holy icons, led by Saints John Damascene and Theodore Studion, claimed that the central point of the Christian faith is that "the Word became flesh and dwelt among us" and that "we have beheld His glory" (Jn 1:14). The Seventh Ecumenical Council, held in Nicea in 787, officially declared that the faith is to be proclaimed "in words and images." Icons safeguard the doctrine of the Incarnation.

The Athanasian Creed contains what may be considered a comprehensive definition of the Incarnation.

The significance of the Incarnation has been extensively written upon throughout Christian history and is the subject of countless hymns and prayers. For instance, the Liturgy of St. John Chrysostom, as used by Orthodox and Byzantine Catholics, includes the "Hymn to the Only Begotten Son" by the Emperor Justinian:

O only begotten Son and Word of God,
Who, being immortal,
deigned for our salvation
to become incarnate
of the holy Theotokos and ever-virgin Mary,
and became man without change;
You were also crucified,
O Christ our God,
and by death have trampled Death,
being One of the Holy Trinity,
glorified with the Father and the Holy Spirit—
Save us!

The view of Maximus the Confessor, Isaac the Syrian, and other Orthodox writers is that the Incarnation was an act of love towards mankind. Even if man had never fallen, God in His love for humanity would still have become man.

Because man fell, it is not only an act of love but an act of salvation. Jesus Christ, by uniting man and God in His own person, reopened the path for all people to have union with God.