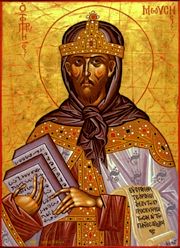 The glorious Prophet Moses, God-seer, is the pinnacle of the lovers of wisdom, the supremely wise lawgiver, the most ancient historian of all. His name means one who draws forth, or is drawn from, that is, from the water. His life is narrated in the Bible (Exodus 2 through Deuteronomy 34:12). The Orthodox Church celebrates his feast day on September 4.[1]

According to the Book of Exodus Moses was born in the thirteenth century BC. He was born of a Hebrew family who came from the tribe of Levi. His parents were Amran and Yocheved. Because Pharaoh ordered that all Hebrew infant boys be slain or thrown into the river his mother hid him in her home for three months. When it was no longer possible to hide him, she hid him in a reed basket by the banks of the river. The infant’s sister Miriam, watched over it from afar, to see what would happen.

By God's providence, the daughter of Pharaoh came to the river to bathe with her servants. She noticed the basket and when she found the child inside, she raised him as her own.

Seeing that her brother had been discovered by the princess, Miriam approached her and negotiated for Moses' mother Yocheved to nurse the child.

When the infant grew up, his mother brought him to the princess. The princess took him with her, and treated him like a son as she did not have any children. She gave him the name Moses, which means, “taken up from the water”.

Moses grew up in the royal palace and was taught all of the wisdom of Egypt and raised in the same manner as all Egyptian boys.

Once, Moses saw an Egyptian overseer beating a Hebrew. He intervened in order to defend the Hebrew and killed the Egyptian. On another occasion Moses saw one Hebrew beating another Hebrew. Moses wanted to stop him but he brazenly replied, “Do you intend to kill me like you killed the Egyptian?” Moses was frightened when he saw that people knew what he had done and so he fled from Egypt and from Pharaoh into a different country, Arabia, in the land of Midian. He settled there, in the home of the priest Jethro, also known as Reuel, after he saved Jethro’s seven daughters from the abuse of Midianite shepherds. He lived in the land of Midian and married Jethro’s daughter Zepphora. He worked as a shepherd, looking after his father-in-law’s flocks.

Once, while shepherding his flocks, Moses was led by an angel of the Lord to the top of Mount Horeb. There he saw a bush that was burning but was not being consumed by the flames; that is, it was enveloped in flames but did not burn up.

Moses decided to come closer to investigate. Here he heard a voice from the midst of the bush saying, “Moses, Moses… Do not come any closer, take off your shoes from your feet; for the place where you stand is holy ground. I am the God of your father, the God of Abraham, the God of Isaac, and the God of Jacob.” Moses hid his face, for he was afraid to look at God.

The Lord said to him, “I have seen the affliction of My people which are in Egypt, and have heard their cry… and I am come down to deliver them out of the land of the Egyptians, and to bring them up out of that land… unto the place of the Canaanites… I will send you unto Pharaoh that you might bring forth My people, the children of Israel, out of Egypt.” At the same time, God granted Moses the power to perform miracles. The Lord gave him his brother Aaron as a helper, who would speak publicly on his behalf.

The bush that did not burn up that Moses saw through God’s revelation to him, received the name ‘Burning Bush’. The symbolism of the miracle is powerful. In a world in which nature itself is worshiped, God shows that He rules over it. The burning bush depicted the state of the chosen Hebrew people, which was persecuted but did not perish.

The burning bush is also significant and relevant to Christianity as it foreshadowed the plight of the early Christians who although persecuted and suffered terribly at the hands of the pagan emperors maintained steadfast faith in Jesus Christ and were not eradicated, despite the efforts of the godless authorities. It was also a foreshadowing or pre-figuration of the All-holy Mother of God, who was not burned by the fire of the divinity of the Son of God when He came down through her from heaven to earth, and was born of her.

Pharaoh and the Plagues of Egypt

Passover and the Parting of the Red Sea

Wandering in the Desert

The Ten Commandments and the Ark of the Covenant

Moses' role as a prophet is complex and diverse, but one of the predominant themes of relevance to the Early Church is prefigured in Deut 18:15. The Gospel writers make an effort at several points to highlight the role of Jesus as the "new Moses," the fulfillment of the prophecy.

The memory of Your prophet Moses,
We celebrate today, O Lord.
By his prayers, we beseech You,
O Christ God, save our souls!

The company of the prophets rejoices with Moses and Aaron,
For their prophecy is fulfilled
As the Cross by which you have saved us shines forth.
Save our souls by their prayers, O Christ our God!

As we celebrate the memory of Thy Prophet Moses,
O Lord, through him we beseech Thee to save our souls.

With the divine and righteous Moses and Aaron, the Prophets' choir today rejoiceth with gladness,
seeing their prophecy fulfilled now in our midst;
for Thy Cross, O Christ our God, whereby Thou hast redeemed us,
shineth in the sight of all as the end and fulfilment of that which they foretold in ancient times.
By their entreaties, have mercy upon us all.