The Proskomedia (from the Greek προσκομιδή, “offering”), sometimes referred to as prothesis (from the Greek πρόϑεσις, "setting forth") or proskomide, is the Office of Oblation celebrated by the priest prior to the Divine Liturgy during which the bread and wine are prepared for the Eucharist. The Proskomedia is a prerequisite for the Divine Liturgy. The priest conducts the Office of Oblation behind the Iconostasis at the Table of oblation or Table of Preparation (also Prothesis, or sometimes Proskomide) that is located to the left of the Altar Table. Proskomedia, when translated to English, means "preparation." 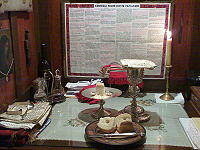 The Prothesis (Table of Oblation) represents the cave of Bethlehem where our Lord and Savior was born. Originally, the Prothesis was located in the same room as the altar table, being simply a smaller table placed against the eastern wall to the north of the altar table. During the reign of the Emperor Justin II, the Prothesis came to occupy its own separate chamber to the north of the altar, in a separate apse, and joined to the altar by a door way. Another apse was added on the south side for the Diaconicon. From this time on many large Orthodox churches were built with three apses on the eastern end of the church building. However, most smaller churches continued to be built having only one apse containing the altar, the Prothesis and the Diaconicon.

The Chalice with the Diskos and Star

The bread and wine are prepared for the liturgy on the Prothesis. The chalice and a round plate on a stand called the diskos or paten that holds the bread are kept on this table. These vessels are normally decorated with iconographic engravings, Christian symbols, and the sign of the cross. The top of each loaf is impressed with a seal bearing the sign of the cross.

The Greeks usually use one large loaf for the Liturgy of Preparation, with a large round seal on it inscribed not only with the square seal (from which the Lamb will be taken), but also markings indicating where the portions for the Theotokos, the Ranks, the Living and Dead will be removed. Those churches which follow Slavic usage will typically use five small loaves, recalling the five loaves from which Christ fed the multitude (John 6:5-14). Normally all will be stamped with a small square seal, though special seals for the Theotokos are sometimes used.

Also on this table is a special liturgical knife, symbolically called the spear, that is used for cutting the eucharistic bread (prosphora) and a liturgical spoon for administering holy communion to the people. There are also special covers for the chalice and diskos and a cruciform piece of metal called the asterisk or star that holds the cover over the eucharistic bread on the diskos. A sponge and cloths for drying the chalice after the liturgy are also usually kept here. The Prothesis is decorated in a manner similar to that of the altar table. Above the Prothesis may be found various icons, often one of Christ praying in Gethsemene: "Let this cup pass..."