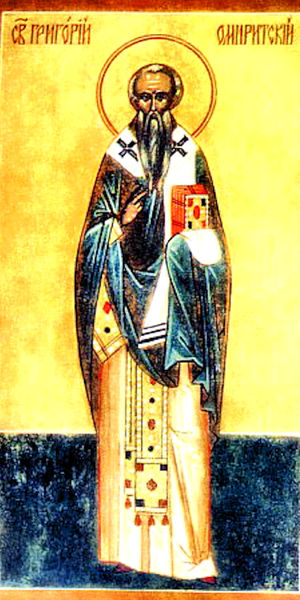 Saint Gregentios was filled with the grace of God and possessed the gifts of healing and wonderworking even in his youth.[7] By the grace of God, he accomplished his mission with much zeal and great fruition, bringing into bosom of the Church a great number of the Jews of that area.[1] He reposed peacefully in the year 552 AD, and his feast day is celebrated annually on December 19.

St. Gregentios lived in the sixth century AD and came from Mediolanum (Milan). His parents were called Agapios and Theodotia, and were very devout. From a very early age Gregentios was distinguished for his eloquence and for his great virtues,[1] and the Providence of God led him to hierarchical service.

While still a Deacon at Mediolanum, he heard the foretelling of his destiny from a hermit, and then he received confirmation of these words from another spirit-bearing Elder, who lived an ascetic life in the mountains.[7]

When Gregentios went to this holy Schemamonk for guidance, a miracle occurred. As he approached the mountain, he saw a fiery column in the air. He soon realized that the fiery column was actually the man of God coming toward him. That night he saw the Elder standing in the air above the ground. The Elder revealed to St. Gregentios that he must go to Rome to pray in the church of Saints Boniface and Aglaida (December 19); then he would go to Alexandria to become a Bishop; and finally he would arrive in the city of Negran (Najran) in the land of Himyaritia (Homer, Omer, in Southern Arabia) to proclaim the Gospel.[7]

St. Gregentios felt himself unworthy of this, and wished to remain with the ascetic as his disciple. So that Gregentios should have no doubts of the veracity of his words, the Elder revealed that he knew a secret about him. In a vision, Gregentios had seen the First-Ranked Apostles Peter and Paul, and they had placed a Bishop's Omophorion upon him.[7]

St. Gregentios stayed a short time in Carthage (North Africa) serving as a Deacon, and then arrived in Rome. He went to the church of Saints Boniface and Aglaida, then to the tomb of St. Peter. There he was granted a vision of the holy Apostle, who told him to walk the path of virtue and to live according to God's will. That night he saw also the Apostle Paul in a dream bringing to him a cup filled with oil, foretelling that he should receive the grace of the priesthood and the episcopacy.[7]

After going to Constantinople and becoming known to Emperor Justin I (518-527) and to the Patriarch, he subsequently visited Alexandria.[1]

During this time the armies of the Ethiopian Emperor Elesbaan (October 24)[9][10] vanquished the Himyarite king Dunaan (Dhu Nuwas), who was of Jewish background and had been persecuting the Christians there and cruelly exterminating all the clergy.[note 1] Thus the Himyaritian city of Negran (Najran) was liberated, and Christianity was restored in the land of Himyaritia.

Elesbaan then sent emissaries to the Patriarch of Alexandria asking him to send a Bishop to Negran who was educated and virtuous, as well as clergy for the churches.[7] While the Patriarch of Alexandria was praying about this, the holy Apostle Mark appeared to him, bidding him to find a Deacon named Gregentios, who was to be ordained to the Priesthood, consecrated as a Bishop, and then to be sent to Elesbaan.[7]

The Patriarch did this, electing Gregentios for this mission. During the ordination service a miracle took place. St. Gregentios' face shone with the grace of the Holy Spirit, and from his vestments came a sweet fragrance like myrrh or incense, filling the whole church with the scent.[7] 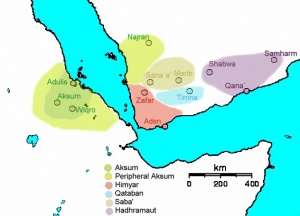 Arriving in Himyaritia (Homer, Omer), a region with many Jews,[note 2] St. Gregentios began to set the Church in order, preaching to both pagans and Jews, and performing his ecclesiastical duties excellently.

After three years Elesbaan returned to Ethiopia (Kingdom of Aksum), leaving the noble Abramius behind as King of the Himyarite Kingdom,[note 3] whom St. Gregentios crowned and anointed as king. Shortly afterwards Abramius issued a decree that all of his subjects were to be baptized.[7]

Debate with the Jews

Then certain prominent Jews turned to the Emperor saying that it was better for people to believe willingly rather than under compulsion. A particularly astute interlocutor from among them was Rabbi Ervan (Herban, Ervas).

They requested that Abramius should permit a debate on faith to be held between them and the Christians, vowing that if the Christians proved victorious in this debate, the Jews would then accept Baptism. The Jews were given forty days to prepare for the debate, which lasted for several days.[7] 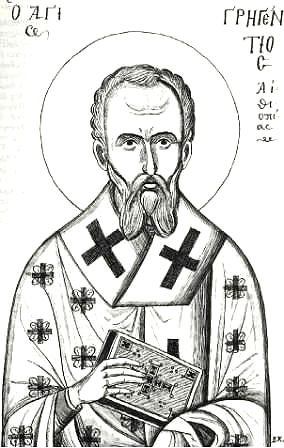 St. Gregentios however, with his wise arguments and righteousness, and with the divine grace of God, refuted all of the arguments of the Hebrew Elder, Rabbi Ervan, using only texts from the Old Testament.[7]

Then in a vision, Ervan beheld the holy Prophet Moses, who worshipped the Lord Jesus Christ. The prophet Moses told Ervan that Ervan was in opposition to the truth and would be defeated. But Ervan would not acknowledge his defeat. He made a last desperate attempt. He said, "If you want me to believe in your Christ, and to acknowledge that yours is the true God, then show Him to me, Bishop!" The Saint replied: "Your request is impertinent. It is not with man that you contend now, but with God. However, the Lord can do what you have asked in order to convince you."[7]

Everyone waited to see what would happen. St Gregentios, having steadfast faith in God and trusting in Him, began to pray aloud. He recalled the mystery of the Incarnation of God the Word, the miracles of His earthly life, the Three-day Resurrection and the Ascension into Heaven, and he invoked the power of the Life-Creating Cross. "Show Thyself to these people, O Lord," he prayed, "and glorify Thy holy Name!" When he finished the prayer, the earth quaked, and in the east the heavens were opened, and in a radiant cloud of light the Lord Jesus Christ came down on earth, and the Voice of the Lord was heard:

"Through the prayers of Bishop Gregentios, He Whom your fathers put to death will heal you."[7]

Like Saul, who was struck blind by the Heavenly light on the road to Damascus, the Jews were struck blind. Then they believed in Christ and they implored the holy Bishop to heal them.[7] Upon receiving holy Baptism, all of them were healed. Rabbi Ervan (Herban, Ervas) was baptized in the presence of the king, and received the Christian name Leo (meaning "lion"), and was honored with the office of Patrician.[1] Thus by the grace of God, Christian truth prevailed.

After this most extraordinary miracle, St. Gregentios guided the flock of Himyaritia (Homer, Omer) for another thirty years, accomplishing his mission with much zeal and great fruition, and managing to bring into bosom of the Church most of the Jews of that area.[1][7] Legend has it that the number of Jews converted and baptized was 5,500,000.[11]

He reposed peacefully on December 19, 552, and his loss was lamented by many people.[1] He was buried in a crypt in the cathedral of Afar.[7]

The use of the article with αγγειοις marks the detail as well known, and the sentence evidently summarizes the story told in the modern Greek manuscript.[12]