From OrthodoxWiki
(Redirected from Arseny (Chavtsov) of Winnipeg)
Jump to: navigation, search

His years in the seminary and thereafter are only vaguely known. He apparently married while in the seminary and was assigned as a priest to a village church in Kharkov. There is a question as to whether he had a son, but soon his wife died, probably about 1890, of an unknown cause. At some point later he was tonsured a monk with the name Arseny, in honor of St. Arsenius of Konevits. But, his journey from his wife's death to his tonsure was a time of great anguish as he related in his elevation speech as Bishop of Winnipeg. In 1900, he was appointed Igumen (Abbot) of Kuriansk Monastery. Two years later he joined Bp. Tikhon in America as he was a natural preacher with fluency in many Russian dialects, and thus, well suited to the American missionary scene. He was active among those returning from the Unia and served many communities after his arrival, including Troy, New York, and Mayfield and Simpson, Pennsylvania.

Little is known for certain of why he returned to Russia or his activities while there. In his request to the Synod, he wrote:

In January of this year, I completed seven years of service in the American Orthodox Mission. I worked, by the mercy of God, as I could, attempting not to be lazy, to carry on the high calling of a missionary, to make a steady effort, not operating solely from rationality/intellect. In the last two years of my service, heavy afflictions and laborious work in the Canadian wilds had taken their toll on my health, and material lack have repeatedly brought my spirit to full despondency. In the last while I have been fully invalided with a terrible hernia, which from the constant journeying creates horrible pain; doctors are trying to force me towards a surgery, but I am afraid to lie beneath a knife, lest I die in this foreign land.[1]

Upon his return to Russia, there are some reports are that he was involved in the training of missionary-priests and that he headed a monastery in the Crimea. After the October Revolution, he served with the White Army to comfort the soldiers. In 1920, he was able to get to Yugoslavia and entered a monastery. Some of his old Canadian flock learned that he was still alive and petitioned Metr. Platon to return him to Canada as a bishop. 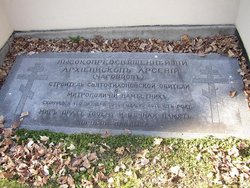