A chapel in Orthodox Christian usage is a term applied to a building or place within a building in which religious services are conducted. While similar in function to a church, a chapel is usually smaller. In large churches, areas (chapels) may be set aside adjacent to or away from the main nave where religious services can be conducted, including divine liturgies. As a special example, the Pokrovsky Sobor in Moscow, Russia, also called the Cathedral of the Intercession and St. Basil's Cathedral, is a "church" made up of nine chapels, the main one dedicated to St. Basil the Blessed. 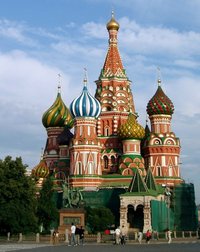 The word chapel is derived from an incident of Christian love by St. Martin of Tours. He had split his cloak into two pieces to give one piece to a beggar in need. Martin thereafter wore his half as a cape, called in Latin capella. As a relic the cape came into the possession of Frankish kings who kept it in a tent when they were at war. The tent in which it was kept was also called capella and priests who held services in the tent were called capellani. From these usages are derived the English words "chapel" and "chaplain."