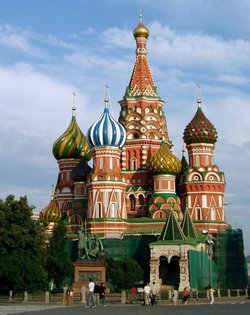 The Intercession Cathedral (Pokrovsky Cathedral, better known as the Cathedral of St. Basil the Blessed or St. Basil's Cathedral) was commissioned by Ivan the Terrible and built between 1534 and 1561 in Moscow to commemorate the capture of Kazan.

In 1588 Tsar Fedor Ivanovich had a chapel added on the eastern side above the grave of St. Basil the Fool-for-Christ (yurodivy Vassily Blazhenny), the saint for whom the cathedral was named.

Saint Basil's is located at one end of Red Square, just across from the Spasskaya Tower of the Kremlin. Not particularly large, it consists of nine chapels built on a single foundation. 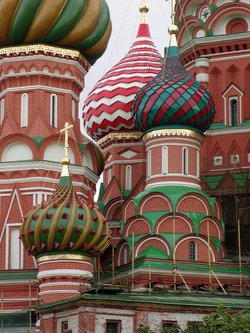 In a garden at the front of the cathedral stands a bronze statue commemorating Dmitry Pozharsky and Kuzma Minin, who rallied Russia's volunteer army against the Polish invaders during the Time of Troubles in the late 16th and early 17th centuries. The statue was originally constructed in the center of Red Square, but the Soviet government felt it obstructed parades and moved the statue in front of the cathedral in 1936.

Legend says Ivan had the architect, Postnik Yakovlev, blinded to prevent him from building a more magnificent building for anyone else. However, this is probably a myth, as Postnik designed the northeast chapel of St. Basil's years later, in 1588.