His Eminence the Most Reverend John (Garklavs) of Chicago was an Archbishop of the American Metropolia (now the OCA). He was the émigré Bishop of Riga and All Latvia who was forced to leave Latvia during World War II, and then came to America. He was elected bishop of Chicago in 1957 and served in that capacity until his retirement in 1978. He is remembered for safeguarding the Tikhvin Icon of the Mother of Our God after World War II.

The future Archbishop John was born in Umurga, Latvia, on August 25, 1898. His father died when he was two years old, leaving his widowed mother to care for him and his two younger brothers. His mother, who was a gifted singer, did not remarry. Abp. John grew up in the fatherless family in a small provincial village of Limbazhi, located about 80 miles from Riga. He attended school in the village and took active part in the Latvian Orthodox Church as an altar boy and then as a psalomchik. He attended the Theological Seminary in Riga, Latvia, from which he graduated with honors.

John was ordained deacon and then a priest in 1936. After Bishop Alexander (Vitols), formerly of Madona, died in Riga in 1942, Fr. John was elected Bishop of Riga. He was consecrated in 1943 after spending a period of time in preparation at the Holy Spirit Monastery in Vilnius. The new bishop found himself caught in the turmoil of World War II attempting to care for the many people displaced by the war. As the Soviet forces came into Latvia in 1944, Bp. John, together with his mother and an adopted son, Sergei, was forced to leave Latvia with a small group of Latvian priests. The group took refuge in southern Czechoslovakia and eventually arrived in West Germany with the help of American soldiers. In West Germany, Bp. John encouraged the Orthodox Christians to organize parishes and "Displaced Persons" camps.

Bp. John arrived in the United States on July 22, 1949, after having petitioned Metropolitan Theophilus to accept him into the Metropolia. In October 1949, he was appointed Bishop of Detroit and Cleveland, and in 1955, he was appointed administrator of the Chicago-Minneapolis diocese. In 1957, he was confirmed as the ruling bishop of the diocese and raised to the rank of archbishop. During his tenure as Archbishop of Chicago, Abp. John served as senior bishop in the Holy Synod and as chairman of the Department of Music of the Metropolia and Orthodox Church in America. He remained Bishop of Chicago until his retirement in September 1978. He reposed on April 11, 1982. 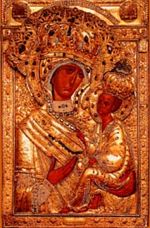 During his travels leaving Latvia during World War II, Bp. John came into possession of the Tikhvin icon that German forces took from Tikhvin, Russia to Riga. Bp. John and his adopted son Sergei took the icon under their care, intending that it be returned to Tikhvin when the atheist communist regime fell. For many years the icon remained in the Holy Trinity Cathedral in Chicago under the care of Abp. John and, after his repose, by his son Sergei. In 2004, after the collapse of the Soviet Union, Abp. John's son, now Fr. Sergei Garklavs, fulfilled Abp. John's promise as the icon traveled back to Russia and to the monastery in Tikhvin, Russia.