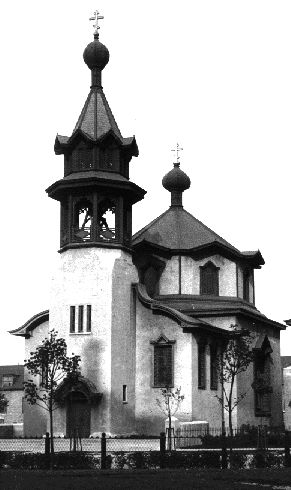 Holy Trinity Orthodox Cathedral serves as the cathedral church for the Diocese of Chicago and the Midwest of the OCA, of which His Eminence, the Most Reverend Job, a Chicago native, served as archbishop until his repose in December 2009. The church building for Holy Trinity was built under the leadership of Fr. John Kochurov, and was consecrated in 1903 by Bishop Tikhon of the Diocese of Alaska, Orthodox Church of Russia.

After efforts to establish an Orthodox Church in Chicago that was inclusive of Greeks, Serbians, and Russians fell apart in 1888, in 1892, a Russian parish was established. For a short time this parish was known as St. Nicholas. Services were originally held at 20 N. Peoria St., (old street numbering), which is also the place that the Greek Annunciation Cathedral (Chicago) and the Serbian Holy Resurrection (Chicago) also found their beginnings.

The San Francisco Morning Call newspaper reported on August 28, 1892 that a "magnificent temple" that would go by the name of St. Vladimir would be built and open its doors some time during the World's Fair in Chicago in 1893. Although the parish did change its name to St. Vladimir, the parish did not get its own building until ten years later, with the erection of the church at 560 N. Leavitt St. (now 1121 N. Leavitt St.), which was designed by the renowned architecht, Louis Sullivan. In the meantime, the congregation worshipped in a rented building at 13 S. Center St. (Ironically, it was the church in Streator, Illinois that obtained pieces of the Russian Pavilion from the World's Fair in order to build a "Russian" church there, though the grand bell from that exhibition was held for the future Holy Trinity, though it never made it, since it was stolen shortly before it was to be installed in the new church.)

Fr. Ambrose Vretta served the parish from 1892 until 1895, when he was transferred to St. Spiridon Church in Seattle. Succeeding him was a young priest from Russia by the name of John Kochurov. It was under his leadership that Holy Trinity was built.

Fr. John served in Holy Trinity until 1907 when he returned to Russia where he continued as a priest and educator and eventually was martyred early in the Bolshevik takeover. Bishop Tikhon returned to Russia in 1907, and was elected Patriarch of the Orthodox Church of Russia in 1917, the first Patriarch elected since the time of Tsar Peter the Great.

Holy Trinity became a cathedral in 1923 when its rector, Fr. Theodore (Pashkovsky) was elected bishop. Bishop Theophilus, as he was named following his monastic tonsure and consecration, would later be elected Metropolitan of the young church in America.

Resembling provincial Russian churches, Holy Trinity Orthodox Cathedral was designed by Louis Sullivan to serve as a center of a Russian neighborhood on Chicago's Near-North Side. Its construction was partially funded by Tsar Nicholas II of Russia. Other benefactors to this project included Cyrus McCormick and Charles R. Crane, who became ambassador to China in 1920.

Sullivan's design includes the church, the outside ornamentation, and the windows. The original outside design of Holy Trinity was also done to Sullivan's specifications, with the sections of the church painted in various bold colors. This color scheme only lasted a couple of years; since 1906 or so, the exterior has been a uniform white or gray. He did not design any of the interior painting other than the geometric stencilling, and most of the interior adornments came directly from Russia. It is unlikely that Sullivan designed the adjacent rectory.

Sullivan halved his normal 10% architecht's fee for this project, in part because of the 'cordial relations' between himself, Crane, Baron M. Schlippenbach (Imperial Russian Consul in Chicago) and Prince Nicholas W. Eugatilcheff (Imperial Russian Vice-Consul), counting as a donation the other 5%. Sullivan also designed the Tiffany chandelier that hangs from the center of the church, though a different chandelier hung there originally.

Later, Crane also arranged for a new, grander iconostasis, which was installed in Holy Trinity in about 1912. (The original iconostasis was sent to St. Mary Church, a fledgling parish in northern Wisconsin.)

As the years have progressed, the neighborhood has changed, and Holy Trinity is situated in an area of Chicago now known as Ukrainian Village, though the population of the area is now very diverse. For this reason, services are almost completely in English, though sometimes Old Church Slavonic is retained for some passages of the Divine Liturgy.

Holy Trinity was designated a Chicago Landmark on March 21, 1979, and has also been designated a National Historic Landmark, and a Historic Point of Interest.

This is the list of clergy as recorded in the book A History of Holy Trinity Russian Orthodox Cathedral of Chicago (pub. 1992)