From OrthodoxWiki
(Redirected from Juvenal of Alaska)
Jump to: navigation, search 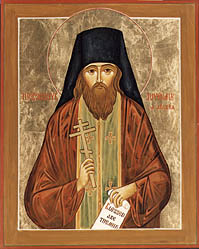 The holy, glorious, right-victorious hieromartyr Juvenaly of Alaska, or Juvenal, Protomartyr of America, was a member of the first group of Orthodox missionaries who came from the monastery of Valaam to preach the Word of God to the native inhabitants of Alaska. He was martyred while evangelizing among the Eskimos on the mainland of Alaska in 1796. His feast day is celebrated on July 2, and he is also commemorated with all the saints of Alaska (September 24), and with the first martyrs of the American land (December 12).

He was born in 1761 in Ekaterinburg, Russia, and was named Jacob Govouchkin. In his monastic life he was tonsured and given the name Juvenaly in memory of St. Juvenal, fifth century Patriarch of Jerusalem. After becoming a monk he was successively ordained deacon and then priest, becoming a hieromonk. He lived much of his early monastic life in the area around Lake Ladoga in northern Russia near Finland at the Konyavesky and Valaam Monasteries.

In 1793, a missionary group of eight monastics was organized at the Monastery of Valaam, near Lake Ladoga, to preach the Word of God to the natives of Alaska. This group of missionaries was led by Archimandrite Joseph (Bolotov), and included four hieromonks including Juvenaly and Makary, one hierodeacon, Steven, and two lay monks including Herman. Their destination was the Russian settlement on Kodiak Island in the Gulf of Alaska, some 8,000 miles away across the length of Asia through Siberia and then the cold Bering Sea of the northern Pacific Ocean. The group arrived on Kodiak Island on September 24, 1794, to an unexpected scene. The settlement was primitive beyond what they were told, and violence was commonplace. The promised church was not there, and the promised supplies for three years were absent.

While Archimandrite Joseph dealt with the leadership issues with Baranov, the leader of the settlement, Hieromonk Juvenaly and the others in their party began their missionary work. Within two years their zeal had brought more than 12,000 Alaskans to the Orthodox Christian faith. They did this not by degrading their former shaman based faith but by showing them that Christianity was the fulfillment of that faith.

As the group continued preaching further away from the settlement on Kodiak, Hieromonk Juvenaly began missionary work on the mainland of Alaska 1796. Here he continued the success of the past two years as he baptized hundreds of Chugach Sugpiag and Athabaskan Indians. But as his mission continued along northwest toward the Bering Sea, he disappeared. No material evidence of his disappearance has been found, but among the Alaskan people oral tradition relates of his martyrdom. The tradition is that as he moved into territory inhabited by Eskimos, some Eskimos did not understand some of his gesturing while making the sign of the cross. Disturbed, a Yupiat shaman ordered an attack upon the hieromonk, and he was killed by spears and arrows. Thus, Juvenaly became the first Orthodox martyr in the Americas.

There are other, conflicting accounts of his martyrdom. In an article entitled "The Orthodox Church in America an Historical Survey" (Russian Review, Vol. 31, No. 2. (Apr., 1972), pp. 138-152 [1], [2]), Fr. Dmitry Grigorieff writes: "Father Juvenaly was killed by the natives on the Alaska mainland in 1795. He had urged the people of a village there to send their children to the mission school on Kodiak Island. They agreed, and Father Juvenaly led a group of children to the seashore. On the way he was overtaken and killed by villagers who had changed their mind." (p. 139).

Regarding St. Juvenaly's Alleged Diary: "This mildly uninspiring document, which contradicts both Church and Native traditions about the saint's activities, was summarised in Bancroft's influential History of Alaska and accepted for a century as a major primary source. However, it is now very strongly suspected of being a forgery written by one of Bancroft's assistants." - Lydia T. Black, "The Daily Journal of Reverend Father Juvenal: A Cautionary Tale," Ethnohistory 28(1)33, 1981.

This document makes reference to a native companion, travelling with the saint. (see also Russian America: A Biographical Dictionary, ed. Richard A. Pierce, The Limestone Press, 1990).

Another source states: "He was killed by the natives, and the reason for his death, was partly because the first thing he did after baptizing the natives was to order them to give up polygamy. He had also persuaded the chiefs and other leading men in the tribes there to give him their children so that the latter might be educated on Kodiak. When he set out with the children, the men regretted what they had done, gave chase, caught up with him, and fell upon him."[3]

Another tradition is found in some versions of the life of the saint: "When Father Juvenaly was attacked by the savages he did not try to defend himself, or run away, which he could easily have done, especially since he had a firearm with him. He let himself be taken without offering any resistance, asking only that those with him should be spared, which was done.

Much later those who had been spared related that when Father Juvenaly was already dead he had risen up and followed his murderers, saying something to them. The savages, supposing him to be still alive, attacked him again and beat him. But as soon as they left him he again stood up and followed them, and this happened several times. Finally, in order to be rid of him, the savages hacked his body to pieces. Only then did this fervent preacher fall silent, a Martyr for the word of God. On the spot where the missionary's remains lay, there at once appeared a column of flame, reaching up to the sky." [4], [5]

From the September 24th Feast Day

Today Alaska rejoices and America celebrates,
For the new world has been sanctified by martyrdom.
Kodiak echoes with songs of thanksgiving,
Iliamna and Kenai observe the festival of faith.
The Apostle and martyr Juvenaly is glorified,
And Peter the Aleut is exalted by his voluntary sacrifice,
In their devotion and love for the Lord
They willingly endured persecution and death for the Truth,
Now in the Kingdom of Heaven they intercede for our souls!

Today Valaam joins Alaska
In celebrating this joyous feast,
As her spiritual son Juvenaly
Embraces the new martyr Peter with love.
Together they suffered for the Lord in America
And united the old world with the new by their voluntary sacrifice.
Now forever they stand before the King of glory and intercede for our souls.