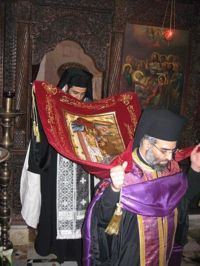 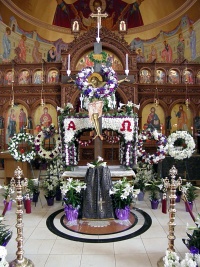 From the Apokathylosis Service, prior to the removal of Christ's Body (the Epitaphios) from the Cross, and its placement in the Sepulcher (Toronto, ON)

The priest may hear confessions at the Epitaphios, and he may anoint people who were not able to be present for the Holy Unction service earlier in the week.

Epitaphios prior to Paschal vigil at Christ the Savior Orthodox Church (Chicago, IL)

The Rite of the "Burial of the Theotokos" began in Jerusalem, and from there it was carried to Russia, where it was used in the Uspensky (Dormition) cathedral in Moscow. Its use has slowly spread among the Russian Orthodox, though it is not by any means a standard service in all parishes, or even most cathedrals or monasteries. In Jerusalem, the service is chanted during the All-Night Vigil of the Dormition. In some Russian churches and monasteries, it is served on the third day after Dormition.