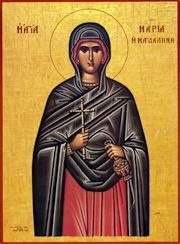 The great and holy myrrh-bearer Mary Magdalene, Equal of the Apostles, was a disciple of Jesus named Mary from Magdala, a town in Galilee. Her feast is celebrated on July 22, and she is also remembered on the Sunday of Myrrh-bearing Women. She is known in some traditions as the Apostle to the Apostles because she was the one who announced the resurrection of Christ to the Eleven. She has an Akathist hymn dedicated to her.1

In keeping His commandments and laws, O holy Mary Magdalene,
You followed Christ, who for our sake was born of a virgin,
And in celebrating your most holy memory today,
We receive forgiveness of sins by your prayers!

When God, who is transcendent in essence,
Came with flesh into the world, O Myrrhbearer,
He received you as a true disciple, for you turned all your love toward Him;
Henceforth you would yourself work many healings.
Now that you have passed into heaven, never cease to intercede for the world!

Standing before the Cross of the Savior,
Suffering with the Mother of the Lord,
The most glorious Mary Magdalene offered praise with tears.
She cried out: What is this strange wonder?
He who holds the whole creation in His hand chooses to suffer:
Glory, O Lord to Your power!