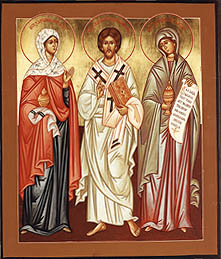 The great and holy myrrh-bearer Mary of Bethany is one of the women disciples of Jesus. She and her sister Martha are celebrated as saints on their shared feast day of June 4. They are also commemerated on the Third Sunday of Pascha or Sunday of Myrrh-bearing Women. Martha and Mary were believers in Christ even before Jesus Christ raised their brother St. Lazarus (October 17) from the dead. After the Ascension of our Lord and Savior Jesus Christ and the murder of the holy Archdeacon Stephen a persecution against the Church of Jerusalem broke out, and Righteous Lazarus was cast out of Jerusalem. The holy sisters then assisted their brother in the proclaiming of the Gospel in various lands. They reposed in Cyprus, where their brother became the first Bishop of Kition after his resurrection from the dead. We do not know how they died.

6 And when Jesus was in Bethany at the house of Simon the leper, 7 a woman came to Him having an alabaster flask of very costly fragrant oil, and she poured it on His head as He sat at the table. 8 But when His disciples saw it, they were indignant, saying, "Why this waste? 9 For this fragrant oil might have been sold for much and given to the poor." 10 But when Jesus was aware of it, He said to them, "Why do you trouble the woman? For she has done a good work for Me. 11 For you have the poor with you always, but Me you do not have always. 12 For in pouring this fragrant oil on My body, she did it for My burial. 13 Assuredly, I say to you, wherever this gospel is preached in the whole world, what this woman has done will also be told as a memorial to her."

38 Now it happened as they went that He entered a certain village; and a certain woman named Martha welcomed Him into her house. 39 And she had a sister called Mary, who also sat at Jesus' feet and heard His word. 40 But Martha was distracted with much serving, and she approached Him and said, "Lord, do You not care that my sister has left me to serve alone? Therefore tell her to help me." 41 And Jesus answered and said to her, "Martha, Martha, you are worried and troubled about many things. 42 But one thing is needed, and Mary has chosen that good part, which will not be taken away from her."

1 Now a certain man was sick, Lazarus of Bethany, the town of Mary and her sister Martha. 2 It was that Mary who anointed the Lord with fragrant oil and wiped His feet with her hair, whose brother Lazarus was sick. 3 Therefore the sisters sent to Him, saying, "Lord, behold, he whom You love is sick." 4 When Jesus heard that, He said, "This sickness is not unto death, but for the glory of God, that the Son of God may be glorified through it." 5 Now Jesus loved Martha and her sister and Lazarus. 6 So, when He heard that he was sick, He stayed two more days in the place where He was. 7 Then after this He said to the disciples, "Let us go to Judea again." 8 The disciples said to Him, "Rabbi, lately the Jews sought to stone You, and are You going there again?" 9 Jesus answered, "Are there not twelve hours in the day? If anyone walks in the day, he does not stumble, because he sees the light of this world. 10 But if one walks in the night, he stumbles, because the light is not in him." 11 These things He said, and after that He said to them, "Our friend Lazarus sleeps, but I go that I may wake him up." 12 Then His disciples said, "Lord, if he sleeps he will get well." 13 However, Jesus spoke of his death, but they thought that He was speaking about taking rest in sleep. 14 Then Jesus said to them plainly, "Lazarus is dead. 15 And I am glad for your sakes that I was not there, that you may believe. Nevertheless let us go to him." 16 Then Thomas, who is called the Twin, said to his fellow disciples, "Let us also go, that we may die with Him."

17 So when Jesus came, He found that he had already been in the tomb four days. 18 Now Bethany was near Jerusalem, about two miles[a] away. 19 And many of the Jews had joined the women around Martha and Mary, to comfort them concerning their brother. 20 Now Martha, as soon as she heard that Jesus was coming, went and met Him, but Mary was sitting in the house. 21 Now Martha said to Jesus, "Lord, if You had been here, my brother would not have died. 22 But even now I know that whatever You ask of God, God will give You." 23 Jesus said to her, "Your brother will rise again." 24 Martha said to Him, "I know that he will rise again in the resurrection at the last day." 25 Jesus said to her, "I am the resurrection and the life. He who believes in Me, though he may die, he shall live. 26 And whoever lives and believes in Me shall never die. Do you believe this?" 27 She said to Him, "Yes, Lord, I believe that You are the Christ, the Son of God, who is to come into the world."

28 And when she had said these things, she went her way and secretly called Mary her sister, saying, "The Teacher has come and is calling for you." 29 As soon as she heard that, she arose quickly and came to Him. 30 Now Jesus had not yet come into the town, but was in the place where Martha met Him. 31 Then the Jews who were with her in the house, and comforting her, when they saw that Mary rose up quickly and went out, followed her, saying, "She is going to the tomb to weep there." 32 Then, when Mary came where Jesus was, and saw Him, she fell down at His feet, saying to Him, "Lord, if You had been here, my brother would not have died." 33 Therefore, when Jesus saw her weeping, and the Jews who came with her weeping, He groaned in the spirit and was troubled. 34 And He said, "Where have you laid him?" They said to Him, "Lord, come and see." 35 Jesus wept. 36 Then the Jews said, "See how He loved him!" 37 And some of them said, "Could not this Man, who opened the eyes of the blind, also have kept this man from dying?"

38 Then Jesus, again groaning in Himself, came to the tomb. It was a cave, and a stone lay against it. 39 Jesus said, "Take away the stone." Martha, the sister of him who was dead, said to Him, "Lord, by this time there is a stench, for he has been dead four days." 40 Jesus said to her, "Did I not say to you that if you would believe you would see the glory of God?" 41 Then they took away the stone from the place where the dead man was lying. And Jesus lifted up His eyes and said, "Father, I thank You that You have heard Me. 42 And I know that You always hear Me, but because of the people who are standing by I said this, that they may believe that You sent Me." 43 Now when He had said these things, He cried with a loud voice, "Lazarus, come forth!" 44 And he who had died came out bound hand and foot with graveclothes, and his face was wrapped with a cloth. Jesus said to them, "Loose him, and let him go."

You fervently believed in Christ and His marvelous acts,
O Martha and Mary, sisters of Lazarus.
You were adorned with radiant virtues
and were found worthy to be numbered with the saints;
together with holy Lazarus pray to God for us.

Since ye believed in Christ with strong and ardent faith,
and ever worshipped His divine and mighty deeds,
ye both adorned yourselves with all the splendour of sacred virtues.
With your holy brother now,
ye are also vouchsafed to dwell with the ranks of Saints on high,
O ye sisters of Lazarus;
and with him, O wise Mary and Martha,
ye pray for us all unto the Master.

In the town of Bethany, ye dwelt of old;
now in Heaven ye abide in Paradise,
where our Lord's countenance shineth.
For ye gave your hearts and souls up with fervent longing
unto Him that is the Life and the Resurrection;
as ye stand on high, O Mary and Martha,
pray Him to grant salvation to us.