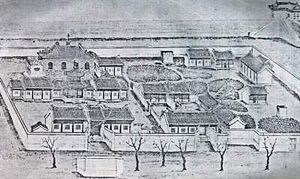 While the literary and translation efforts continued through most of the later part of the nineteenth century, the missionary work in the later part of the century lagged due to inadequate funding for preaching outside of Beijing, as well as the arrival of new missionaries whose Chinese language skills were inadequate. The era of an all-Russian clergy ended when a Chinese priest, Fr. Mitrophan Ji, was ordained in Japan by Bp. Nicholas of Tokyo on June 29, 1882. Fr. Mitrophan died a martyr in the June 11, 1900 Boxer uprising in China. The nearly 500 baptisms that had been performed by the Mission and the establishment of two new churches, one each in Hankou and Kalgan (Zhangjiakou) had not contributed significantly to the Mission’s missionary efforts.