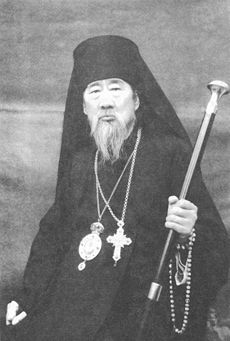 His Grace, the Right Reverend Simeon (Du Runchen) of Shanghai was the bishop of Shanghai of the Church of China during the middle of the twentieth century.

Born Fyodor Du on February 11, 1886 in China, Fyodor was a descendent of the Russian cossacks from Albazin who were settled in Beijing in 1685 after the Russian settlement of Albazin was destroyed by the Chinese army. His father was a church reader.

He and his family escaped miraculously from the mobs of the Boxer (Yihetuan Movement) Rebellion of 1900.

Fyodor attended theological courses at seminary classes of the Russian Orthodox Mission in Beijing. He completed these courses in 1904. After completing his studies he continued his activities at the mission as a reader and catechist. In 1908, Bishop Innocent, chief of the mission, ordained Fyodor a deacon, at the age of 22. Bp. Innocent appointed him to serve at the mission metochion, the Annunciation Church, in Harbin. In addition to his duties as deacon, Fyodor served as a missionary, the treasurer, and manager of the parish’s office in Harbin.

With the arrival of many refugee Christians from Russia in 1919, he was active in publishing Russian textbooks for the schools in Harbin.

His life as a missionary took him to many cities in China, including Shanghai, Hankou, Haimin, Kaifeng, Weihou, and Mukden, as well as to localities in Manchuria. In 1932, he was assigned to duties in Tianjin where, in 1934, he was elevated to protodeacon.

On September 16, 1941, Dn. Fyodor was ordained to the priesthood and made priest-in-charge of the St Innocent Mission Church in Tainjin. In 1943, he was elevated to archpriest and in 1945, he was awarded a “palitza”. In early 1950, Fr. Fyodor traveled to the Soviet Union, where he accompanied Patriarch Alexei to a conference in Tblisi, Georgia, of the Russian, Georgian, and Armenian Churches.

On July 23, 1950, Fr. Fyodor was tonsured a monk at Trinity-Sergius Lavra and given the name Symeon. Two days later he was raised to the dignity of archimandrite. On July 30, 1950, Arch. Simeon was consecrated Bishop of Tianjin in the Cathedral of the Annunciation in Moscow. The celebrants in the consecration were: Patriarch Alexei, Metr. Nicholas of Krutisk and Kolomna, Metr. Elevfery of Prague, Abp. Victor of Beijing, Bp. Flavian of Orlov and Briansk, and Bp. Gabriel of Vologda and Cherepvetsk.

On September 26, 1950, Bp. Simeon was installed as Bishop of Shanghai.