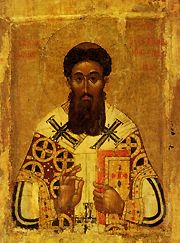 Our father among the saints Gregory Palamas (1296-1359), Archbishop of Thessalonica, was a monk of Mount Athos in Greece (at Vatopedi Monastery and Esphigmenou Monastery), and later became Archbishop of Thessalonica. He was a preeminent theologian and a proponent of hesychastic theology. His feast days in the Church are November 14 and the second Sunday of Great Lent as the Sunday of St. Gregory Palamas.

He was probably born at Constantinople of a noble Anatolian family. From his youth, he was attracted to the monastic ideal, and successfully persuaded his brothers and sisters, along with his widowed mother, to take up the monastic life. Around 1318 he and his two brothers went to Mount Athos, where they learned firsthand the traditional hesychastic way of contemplative prayer.

With the encroachment of the Turks, he was forced to flee to Thessalonica, being ordained a priest there in 1326. Afterward, he took up the eremetic life at a mountain near Beroea, and eventually returned to Athos in 1331. Six years later, he became involved in a controversy with Barlaam, a Greek monk from Calabria, Italy. 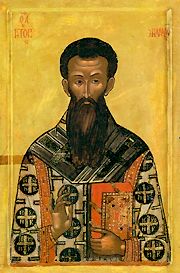 Icon of St. Gregory from Dionysiou Monastery on Mount Athos

He was initially asked by his fellow monks on Mount Athos to defend them from the charges of Barlaam. Barlaam believed that philosophers had better knowledge of God than did the prophets, and he valued education and learning more than contemplative prayer. He stated the unknowability of God in an extreme form, having been influenced by a reductionist interpretation of the writings of St. Dionysius the Areopagite. As such, he believed the monks on Mount Athos were wasting their time in contemplative prayer when they should instead be studying to gain intellectual knowledge.

When St. Gregory criticized Barlaam's rationalism, Barlaam replied with a vicious attack on the hesychastic life of the Athonite monks. Gregory's rebuttal was the Triads in defense of the Holy Hesychasts (c. 1338), a brilliant work whose teaching was affirmed by his fellow Hagiorites, who met together in a council during 1340-1341, issuing a statement known as the Hagioritic Tome, which supported Gregory's theology.

A synod held in Constantinople in 1341 also supported St. Gregory's views, condemning Barlaam. Later, in 1344, the opponents of hesychasm secured a condemnation for heresy and excommunication for Gregory, the saint's theology was reaffirmed at two further synods held in Constantinople in 1347 and 1351. Collectively, these three synods in Constantinople are held by many Orthodox Christians and several prominent theologians to constitute the Ninth Ecumenical Council. Between the latter two synods, Gregory composed the One Hundred and Fifty Chapters, a concise exposition of his theology.

In 1347, he was consecrated Archbishop of Thessalonica, but the political climate made it impossible for him to take up his see until 1350. During a voyage to the Imperial capital, he was captured by the Turks and held in captivity for over a year. He died in 1359 and was subsequently glorified by the Orthodox Church in 1368.

Contrary to Barlaam, Gregory asserted that the prophets in fact had greater knowledge of God, because they had actually seen or heard God himself. Addressing the question of how it is possible for humans to have knowledge of a transcendent and unknowable God, he drew a distinction between knowing God in his essence (in Greek, ουσία) and knowing God in his energies (in Greek, ενέργειαι). He maintained the Orthodox doctrine that it remains impossible to know God in his essence (God in himself), but possible to know God in his energies (to know what God does, and who he is in relation to the creation and to man), as God reveals himself to humanity. In doing so, he made reference to the Cappadocian Fathers and other early Christian writers. 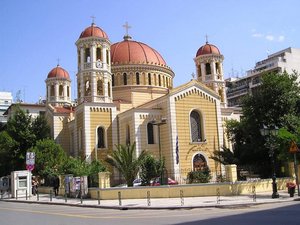 Gregory further asserted that when the Apostles Peter, James and John witnessed the Transfiguration of Jesus Christ on Mount Tabor, that they were in fact seeing the uncreated light of God; and that it is possible for others to be granted to see that same uncreated light of God with the help of repentance, spiritual discipline and contemplative prayer, although not in any automatic or mechanistic fashion.

He continually stressed the Biblical vision of the human person as a united whole, both body and soul. Thus, he argued that the physical side of hesychastic prayer was an integral part of the contemplative monastic way, and that the claim by some of the monks of seeing the uncreated light was indeed legitimate. Like St. Simeon the New Theologian, he also laid great stress in his spiritual teaching on the vision of the divine light.

Besides the Triads in defense of the Holy Hesychasts (c. 1338) and the One Hundred and Fifty Chapters (c. 1347-1351), numerous homilies of St. Gregory are also extant. Substantial passages from his writings are also collected in the Philokalia. The bulk of his work remains as yet untranslated.

Probably one of the most significant writers of our day regarding the theology of St. Gregory is Metropolitan Hierotheos (Vlachos) of Nafpaktos, whose prolific published writing makes frequent reference to Gregory's theology, even when hesychasm or the saint are not the primary subject of his work.

"When we strive with diligent sobriety to keep watch over our rational faculties, to control and correct them, how else can we succeed in this task except by collecting our mind, which is dispersed abroad through the senses, and bringing it back into the world within, into the heart itself, which is the storehouse of all our thoughts?"

"Because the Deity is goodness itself, true mercy and an abyss of loving bounty - or, rather, He is that which embraces and contains this abyss, since He transcends every name that is named and everything we can conceive - we can receive mercy only by union with Him. We unite ourselves to Him, in so far as this is possible, by participating in the godlike virtues and by entering into communion with Him through prayer and praise. Because the virtues are similitudes of God, the participate in them puts us in a fit state to receive the Deity, yet it does not actually unite us to Him."

O light of Orthodoxy, teacher of the Church, its confirmation,
O ideal of monks and invincible champion of theologians,
O wonder working Gregory, glory of Thessalonica and preacher of grace,
always intercede before the Lord that our souls may be saved.

Holy and divine instrument of wisdom,
joyful trumpet of theology,
together we sing your praises, O God-inspired Gregory.
Since you now stand before the Original Mind, guide our minds to Him, O Father,
so that we may sing to you: "Rejoice, preacher of grace."