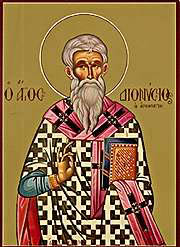 The holy, glorious and right-victorious Hieromartyr Dionysius the Areopagite (also Dionysios or Denys) was baptized by Saint Paul in Athens and is numbered among the Seventy Apostles. His feast day is celebrated on October 3.

Prior to his baptism, Dionysius grew up in a notable family in Athens, attended philosophical school at home and abroad, was married and had several children, and was a member of the highest court in Greece, the Areopagus. After his conversion to the True Faith, St. Paul made him Bishop of Athens. Eventually he left his wife and children for Christ and went with St. Paul in missionary travel. He travelled to Jerusalem specifically to see the Most Holy Theotokos and writes of his encounter in one of his books. He was also present at her Dormition.

Seeing St. Paul martyred in Rome, St. Dionysius desired to be a martyr as well. He went to Gaul, along with his presbyter Rusticus and the deacon Eleutherius, to preach the Gospel to the barbarians. There his suffering was equalled only by his success in converting many pagans to Christianity.

In the year 96, St. Dionysius was seized and tortured for Christ, along with Rusticus and Eleutherius, and all three were beheaded under the reign of the Emperor Domitian. St. Dionysius' head rolled a rather long way until it came to the feet of Catula, a Christian. She honorably buried it along with his body.

Four theological works are attributed to Dionysius: The Divine Names, The Mystical Theology, The Celestial Hierarchy, and The Ecclesiastical Hierarchy, as well as eleven letters. While there were occasional questions raised regarding the true authorship of the Dionysian writings in the Middle Ages, it is Hugo Koch and Josef Stiglmayer's works (1895)[1] that definitively laid to rest the idea of tracing the texts back to the apostolic age. The scholarly consensus now identifies the corpus as the work of a fifth-century Syrian student of the pagan Neoplatonist Proclus.[2] In his introduction to Mystagogy: A Monastic Reading of Dionysius Areopagita, Orthodox Bishop Alexander (Golitzin) of Toledo writes that it is "now recognized as indefensible" that the author of the Dionysian writings could be the first century disciple of St Paul.[3] "The first clearly datable reference to the Dionysian corpus comes to us from …532…."[4] Bishop Alexander's own suggestion is that the real author of the works was the fifth-century theologian Peter the Iberian.

Pseudo-Dionysius is recognized to be "employing Neoplatonic language to elucidate Christian theological and mystical ideas."[5] Some recent Orthodox scholars (such as Frs. Georges Florovsky and John Meyendorff) have been mildly critical of the influence of the Dionysian corpus,[6] but recent defenders include Bp. (then-Igumen) Alexander, mentioned above, who sees it as a fully Christian liturgical theology,[7] and Vladimir Lossky, who sees the Dionysian interpretation of the unknowability of God as fundamental to any Christian thought and as setting the stage for the work of St. Gregory Palamas.[8] However controversial the texts in recent years[9], their theology was incorporated into the mainstream of Orthodox theology through its adoption by St. Maximus the Confessor and St. John of Damascus, who quotes Dionysius' Letter to Titus in his work On the Divine Images, a defense of icons during the iconoclastic controversies.

Having learned goodness and maintaining continence in all things,
you were arrayed with a good conscience as befits a priest.
From the chosen Vessel you drew ineffable mysteries;
you kept the faith, and finished a course equal to His.
Bishop martyr Dionysius, entreat Christ God that our souls may be saved.

As a disciple of the apostle caught up to the third heaven,
you spiritually entered the gate of heaven, Dionysius.
You were enriched with understanding of ineffable mysteries
and enlightened those who sat in the darkness of ignorance.
Therefore we cry to you: Rejoice, universal Father!