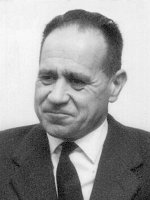 Vladimir Nikolaievich Lossky was an influential theologian of the Russian emigration. He was born in 1903, then exiled from Russia in 1922. He moved to Paris two years later and remained there until his death in 1958. He served as the first dean of the St. Denys Institute in Paris, where he also taught dogmatic theology. Lossky is remembered best for his book, The Mystical Theology of the Eastern Church.

Vladimir was born on May 26, 1903, to the family of Nicolas Onufriyevich Lossky, who was a philosopher and professor in the University of St. Petersburg. After Vladimir begun his studies at the University of St. Petersburg, however, Nicolas was expelled from Russia with his entire family in November 1922. Vladimir was forced to continue his studies in Prague, Czechoslovakia, and then at the Sorbone in Paris, where his family stayed. His interests lay in Greek Patristics and in Western medieval philosophy.

He became the first dean of St. Denys Theological Institute, Paris, where he taught Dogmatic Theology from 1944 to 1953. He continued his teaching in the frame of the pastoral courses organized by the Exarchate of Moscow Patriarchate in Paris. 1950 sees Elder Sophrony of Essex working with Lossky on the Messager de l’Exarchat du Patriarche Russe en Europe Occidentale, which he did until 1957. He influenced Elder Sophrony's thought on many contemporary issues while complementing Elder Sophrony's work on Trinitarian thought and its application to the Church and humanity; however, he would not talk about a deified human nature, nor about the idea of God-forsakenness in a positive view, as Elder Sophrony did. He remained in Paris until his sudden death on February 7, 1958, at the age of 54.

Vladimir Lossky is best remembered for his book The Mystical Theology of the Eastern Church, the first patristic synthesis of theology of dogma and is widely recognised within the Orthodox Church.