From OrthodoxWiki
(Redirected from Iconoclast)
Jump to: navigation, search

Literally, iconoclasm is the destruction of religious icons and other sacred images or monuments, usually for religious or political motives. In Christian circles, iconoclasm has generally been motivated by a literal interpretation of the second of the Ten Commandments, which forbids the making and worshipping of "graven images." This is clearly a misinterpretation of the decalogue because if one continues to read through the Book of Exodus one would encounter the command to Moses to build the Tabernacle: a visible icon of the invisible God.

People who engage in such practices are called iconoclasts, a term that has come to be applied to any person who breaks or disdains established dogmas or conventions. Conversely, people who revere or venerate religious images are called iconodules (or servants of icons).

Iconoclasms can be carried out by people of a different religion but are often the result of sectarian disputes between factions of the same religion.

Emperor Leo III the Isaurian (reigned 717–741) banned the use of icons of Jesus, Mary, and the saints and commanded the destruction of these images in 730. The Iconoclastic Controversy was fueled by the refusal of many Christian residents outside the Byzantine Empire, including many Christians living in the Islamic Caliphate, to accept the emperor's theological arguments. St. John of Damascus was one of the most prominent of these. Ironically, Christians living under Muslim rule at this time had more freedom to write in defense of icons than did those living in the Byzantine Empire. St. John of Damascus's teaching centered around his clarification and distinction of the terms worship and veneration, teaching that we worship God, depicted in the icon, and simply venerate the icon itself as an image of the Prototype. In his defense of icons he wrote, "I do not worship creation over the creator."

Leo was able to promulgate his policy because of his personal popularity and military success—he was credited with saving Constantinople from an Arab siege in 717–718 and then sustaining the empire through annual warfare.

Leo III's son, Constantine V (reigned 741–775), was once challenged by a general who used iconophilic ("icon-favoring") propaganda, but his military success against this threat cemented his own position.

The first iconoclastic period came to an end when Leo IV (Constantine V's son) died and his widow, Empress Irene, came into power. An iconophile, she initiated the Second Council of Nicea in 787, at which the veneration of icons was affirmed, although the worship of icons was expressly forbidden. Among the reasons were the doctrine of the Incarnation: because God the Son (Jesus Christ) took on flesh, having a physical appearance, it is now possible to use physical matter to depict God the Son and to depict the saints. Icon veneration lasted through the reign of Empress Irene's successor, Nicephorus I (reigned 802-811), and the two brief reigns after his. 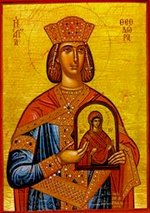 Emperor Leo V (reigned 813–820) instituted a second period of iconoclasm in 813, which seems to have been less rigorously enforced, since there were fewer martyrdoms and public destructions of icons. Leo was succeeded by Michael II, who was succeeded by his son, Theophilus. Theophilus died, leaving his wife, Theodora the Iconodule, regent for his minor heir, Michael III. Like Irene 50 years before her, Theodora mobilized the iconodules and proclaimed the restoration of icons in 843. Since that time the first Sunday of Lent is celebrated as the feast of the "Triumph of Orthodoxy."