From OrthodoxWiki
(Redirected from Simeon the New Theologian)
Jump to: navigation, search 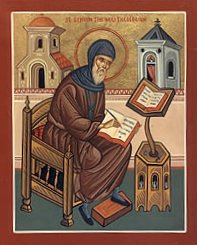 Our venerable and God-bearing father Symeon the New Theologian (949–1022) is one of three saints of the Orthodox church to have been given the title of Theologian (the others are St. John the Apostle and St. Gregory Nazianzen). Born in Galatia and educated at Constantinople, he became abbot of the monastery of St. Mamas. His feast day is celebrated by some on March 12, the date of his repose, while others commemorate his feast on October 12, because March 12 falls within Great Lent.

St. Symeon was a poet who embodied the mystical tradition. He wrote that humans could experience the Spirit of God directly. His works influenced the hesychastic controversy of the 14th century.

Some of his writings are included in the Philokalia.

Some have taken New Theologian to mean that St. Symeon was somehow especially radical in his teachings. This is not the case, rather, these are two seperate titles. St. Symeon was, in this life, called 'Symeon the New' to distinguish him from a Symeon who was older than he; after his repose, he was given the title of Theologian and retained the 'New' distinction.

"When a man walks in the fear of God he knows no fear, even if he were to be surrounded by wicked men. He has the fear of God within him and wears the invincible armor of faith. This makes him strong and able to take on anything, even things which seem difficult or impossible to most people. Such a man is like a giant surrounded by monkeys, or a roaring lion among dogs and foxes. He goes forward trusting in the Lord and the constancy of his will to strike and paralyze his foes. He wields the blazing club of the Word in wisdom." -- The Practical and Theological Chapters

"Our holy fathers have renounced all other spiritual work and concentrated wholly on this one doing, that is, on guarding the heart, convinced that, through this practice, they would easily attain every other virtue, whereas without it not a single virtue can be firmly established."

"For those who believe in Him, Christ will become all this and even more, beyond enumeration, not only in the age to come but first in this life, and then in the world to come. Thou in an obscure way here below and in a perfect manner in the Kingdom, those who believe see clearly nonetheless and receive as of now the first-fruits of everything they will have in the future life. Indeed, if they do not receive on earth everything that was promised to them, they do not have any part of foretaste of the blessings to come, their higher hope being set on the hereafter. However, it is through death and the resurrection that God in His foresight has given us the Kingdom, incorruptibility, the totality of life eternal. Given these conditions, we unquestionably become partakers of the good things to come, that is, incorruptible, immortal, sons of God, sons of the light and of the day, inheritors of the Kingdom of Heaven, since we carry the Kingdom within."