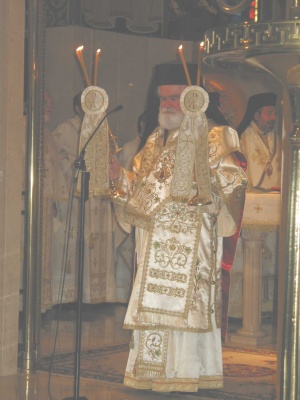 His Eminence Metropolitan Alexios (Panagiotopoulos) is a bishop of the Ecumenical Patriarchate serving in the United States within the Greek Orthodox Archdiocese of America. He is primate of the Metropolis of Atlanta, which covers the southeastern portion of the United States.

Anthimos Panagiotopoulos was born on December 25, 1943, in Patras, Greece. His parents were Spyridon and Angeliki Panagiotopoulos. In 1963, Anthimos was tonsured as a monk of Vatopedion Monastery. He graduated from the Anthonias Ecclesiastical Academy in 1964. Upon his ordination to the diaconate in late 1965, he served as archdeacon of the Metropolis of Patras, but later moved to Athens to enroll in the School of Theology of the University of Athens (from which he received a degree in 1973). While enrolled at the university, he served concurrently as deacon to the Athenian churches of St. Panteleimon and St. Spyridon.

Deacon Anthimos returned to Patras upon his ordination to the priesthood on August 27, 1972. He became a member of the Gerokomion Monastery of the Virgin Mary, while serving the church of St. Sophia in Patras. Shortly after receiving his degree from the University of Athens, he applied to the Doctor of Ministry program at Boston University's School of Theology. He was accepted and moved to Boston, where he served as proistamenos of the church of the Dormition of the Theotokos in Burlington, Vermont. Fr. Anthimos received his doctoral degree in 1977 and returned to Patras, where he was appointed Hegumen of the Gerokomion Monastery. He was shortly summoned back to America, however, to become Dean of the Cathedral of Ss. Constantine and Helen in Brooklyn, New York. The following year, he was transferred to Astoria to serve as dean of the combined communities of St. Demetrios and Ss. Catherine and George.

On April 7, 1987, the Holy Synod of the Ecumenical Patriarchate elected Fr. Anthimos as titular bishop of Troas. At his consecration on May 17 of that year, he was appointed as chorepiscopos (village bishop) of Astoria. (Although this is a former office in Orthodox canon law, in this case the term seems to have been more intended to describe the scope of his responsibilities with respect to the Astoria community.) In 1989, his duties were expanded to include oversight of parishes throughout Queens, Long Island, southern Connecticut, and upstate New York. He was also named as director of the Hellenic Cultural Center, an institution of the Greek Orthodox Archdiocese of America based in Astoria.