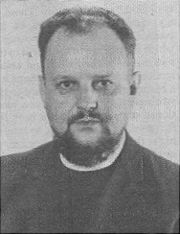 George M. Benigsen was a mitred archpriest of the Orthodox Church in America. Of Russian origin, he served extensively in the OCA and its predecessor organization the Metropolia. He participated in the Pskov Orthodox Mission during the early 1940s.

George was born in 1915 in the city of Kazan, Russia, into the family of an engineer, Mikhail Ivanovich Benigsen just prior to the Bolshevik revolution in late 1917. As Kazan fell to the Bolshevik forces his family attempted to follow the White Army through Siberia. However, they fell into the arms of the Red Army but were able to move, in 1921, to the city of Smolensk. In 1924, the Benigsen family was able to emigrate to the then independent country of Latvia, joining grandparents.

Settling in the city of Dvinsk, now Daugavpils, George received his primary and intermediate education. It was in Dvinsk that George established his religious roots. His family observed all the feasts and fasts and attended the Divine Services regularly. However, by the time George had entered high school, his faith of childhood began to wane and his life in the Church became sporadic, just maintaining an effort that did not sadden his relatives.

In 1933, his oldest brother died before Pascha, a death that greatly impacted George's soul. It was during the Paschal Vespers during the evening of the first day of Pascha, a service that he decided to join as he passed the almost empty church, that his future life was decided, that he would become a priest. He left the church that evening with a firm decision that never changed.

His new activity in church life led him to the Russian Christian Student Movement, a school of practical Christianity theology that in those years experienced a special spiritual and organizational development in Europe. His life in the Movement culminated, in 1937, in accomplishments that for most people are spread over longer periods of time. At the age of 22, George married Elena (Helen) Ivanovna Kraubler, a fellow member of the Student Movement from Estonia. Then, in the fall of 1937, he entered the theological faculty of the University of Riga, at the same time he also was ordained a deacon by Metropolitan Augustine of Riga on September 14 in the Cathedral of Riga. He the entered into diaconal service at the cathedral that was combined with his studies at the university and teaching religion in several primary schools in the city of Riga.

The short span of religious freedom in the Baltic states came to an end in June 1940 when the Soviet Union invaded the Baltic countries of Latvia, Estonia, and Lithuania and theological life came to an end as militant atheism hung over the Church. As the theological faculty of the university was closed and the future became more tragic, but quite clear, of arrest, prison, execution, or exile to a concentration camp, Deacon George decided that with the prospect of jail or exile to Siberia or Karaganda, it would better to go down that road with not just a knapsack on one's back, but with the fullness of the gifts of Divine Grace, as a priest. On the Feast of the Holy Trinity (Pentecost) in 1941, Dcn. George was ordained a priest by the Exarch of the Baltic States, Metr. Sergius (Voskresensky). Under Metr. Sergius, Father George served as the secretary of the Baltic Exarchate of the Patriarchate of Moscow.

Having lived through Soviet terror, the city, in early July 1941, met its new "liberators" with open arms as the German army entered Riga, a joy that did not last very long as a new dictatorship replaced the so-called "liberation". By early autumn of 1941 Metr. Sergius was able to get permission from the German military government to send a group of priests as missionaries to the northwestern regions of Russia occupied by the Germans. Fr. George became part of the missionary effort that was centered in Pskov, an ancient Russian city only a short distance from Estonia.

Under the difficult conditions of the German occupation, Fr. George became a witness of the spontaneous religious revival of Church life and of the great thirst for the Faith among the Russian population. As a priest in Pskov, Russia under German occupation, Fr. George served at the Holy Trinity Cathedral of Pskov. He was the secretary of the mission. Later, he became rector of the church of the Holy Martyr Demetrius, where he organized a church school for 200 students and an orphanage for forty children who had lost their parents in the war.

The mission at Pskov continued for two and a half years until 1944 when the advancing Soviet forces ended the brief period of religious freedom. With the advance of the Soviet forces, Fr. George and his family moved west. After participating in the funeral of the assassinated Metr. Sergius in Latvia, they moved into Germany where Fr. George served briefly under Metr. Seraphim (Lade) of Berlin at the Berlin cathedral providing spiritual care for Russian refugees and forced labor workers. Then, with a group of clergy and laity the Benigsen family fled to southern Germany in February 1945, there to see the final street fighting between the German and American forces.

In the turmoil at the end of the war, Fr. George began a new period of pastoral services among the refugees. The threat of forced repatriation of Russian hung over the "Displaced Person" community. Through a miracle Fr. George and his family escaped repatriation when Fr. George found that the secretary of the American commandant was a former schoolmate. Fr. George continued to serve in the refugee camps until 1947 when he received an appointment to the chapel of St. Stephen attached to the House of Mercy in Munich, Germany. In 1948, Fr. George succeeded Fr. Alexander Kiselev, the founder of the House of Mercy, as its director, a position he held until his emigration to the United States.

Service in the United States

Fr. George and his family arrived in the United States on November 10, 1950. In January 1951, Fr. George was appointed by Bishop John (Shahovskoy) of San Francisco as rector of the Church of St. John the Baptist in Berkeley, California. On December 9, 1952, Bp. John appointed Fr. George as Dean of Holy Trinity Cathedral in San Francisco, where he served more than nine years, combining his pastoral work in the Cathedral with the duties of Secretary of the Diocese of San Francisco and the West. During these years Fr. George founded a church school at the Cathedral at which 130 students were enrolled. Fr. George actively participated in the pan-Orthodox, the ecumenical, and the social life of the city, service that was acknowledged in the presentation to him of the "key to the city" by the mayor of San Francisco.

In February 1960, Fr. George was transferred to the Church of the Transfiguration in Denver, Colorado, a parish that needed pastoral help. There, he organized a church school and a choir under the leadership of his wife, Helen, that sang at many Orthodox services including at the chapel of the Air Force Academy at Colorado Springs. Invited to teach Russian at the University of Colorado, Fr. George used the opportunity to enroll in the graduate school of the university and earn a Master's degree in Russian studies.

In September 1964, Fr. George was invited to be the Orthodox chaplain for the students of the University of California in Berkeley. At Berkeley, Fr. George created an Orthodox student center with the chapel dedicated to St. Joseph of Arimathea. The following year he was also asked to organize the Russian program at the campus of the newly established University of California at Santa Cruz where he also opened another university Orthodox chapel, this one dedicated to the Resurrection of Christ.

In 1967, Fr. George was appointed Dean of Holy Protection Cathedral in New York by Metr. Ireney (Bekish). This appointment was short as Fr. George was appointed in late 1968 as Dean of Ss. Peter and Paul Cathedral in Montreal, Canada and Secretary of the Canadian Diocese. At the Cathedral, Father's wife Helen organized a children choir in addition to the cathedral choir. In the summer of 1970, Fr. George returned to California when he was appointed rector of St. Nicholas Church in Saratoga, California, a position he held until early 1980. He also returned as director of the Summer Language Institute at the Santa Cruz campus of the University of California. During this time he also served as Chancellor of the Diocese of San Francisco and the West. Fr. George retired from his university activities in 1978.

In early 1980, Fr. George returned to serve as Dean of Holy Trinity Cathedral in San Francisco as well as continuing as chancellor. On July 1, 1981, Fr. George retired active clerical life although he continued to serve occasionally at the Holy Assumption Monastery in Calistoga, California. He also produced from 1980 to 1991 a weekly religious broadcast to Russia at the invitation of Radio Liberty.

The Mitred Archpriest George Benigsen fell asleep in the Lord on August 6, 1993. His funeral liturgy was served at Holy Trinity Cathedral in San Francisco and burial was at the Serbian cemetery of San Francisco.