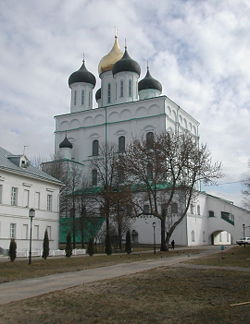 Trinity Cathedral (Russian: Троицкий собор or Троицкий храм) in Pskov, Russia is the current cathedral of a line of churches and cathedrals since the tenth century dedicated to the Holy Trinity in the Pskov Kremlin (Krom). Trinity Cathedral is the final resting place for Pskov princes, particularly the sainted Princes Vsevolod-Gabriel and Dovment. The present cathedral dates from the late seventeenth century.

By tradition, the establishment of a church in Pskov dedicated to the Holy Trinity dates to a return visit in the tenth century by the newly enlightened Princess Olga to her home town Pskov. In 957, while standing on the left bank of the Velikaya River, looking at the virgin forests of Pskov she saw three sun rays coming from heaven and illuminating the site where Trinity Cathedral now stands in the Pskov Kremlin. Understanding this miraculous sign of God, she vowed to build on that spot a church dedicated to the Holy Trinity. 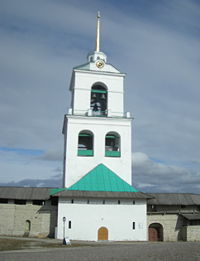 While the date of the first, wooden church was built is not known, it was replaced by a stone church in 1138 in what became the Pskov Kremlin. The stone Trinity Cathedral was built under the sponsorship of Prince Vsevolod and Abp. Nifont of Novgorod. The stone cathedral was rebuilt in the fourteenth century as attested to by an entry in the ‘’Novgorodian First Chronicle’‘ that noted the blessing, in 1365, of the reconstruction of the stone church by Abp. Alexei of Novgorod. The new cathedral was finished in 1367. The cathedral was again badly damaged by fire in 1609 that required renovation of the interior. The present Moscow architecturally styled cathedral was built between 1691 and 1699. Structurally the new cathedral is a two story building with five domes. The two stories provide an unheated summer church in the upper floor and a heated winter church in the lower floor. The cathedral is 196 feet long, 124 feet wide, and 256 feet high to the top of the highest cross. Trinity Cathedral has been the seat of the Pskov Eparchy, since 1589. 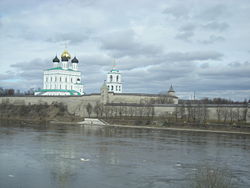 Trinity Cathedral and bell tower in the Pskov Kremlin

The cathedral contains shrines to two thirteenth century heros of Pskov, Ss Vsevolod-Gabriel, the first prince of Pskov, and Prince Dovmont. St. Vsevolod’s tomb is located to the left of the iconostasis, while that of St. Dovmont is in a separate chapel over which his two-handed style sword is hung. The sword was used during coronations of the Pskov princes. Other princes of Pskov are buried in a crypt under the lower chapel in the cathedral. The miracle-working Chirskaya icon of the Holy Mother of God is also in Trinity Cathedral in Pskov.