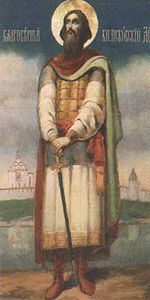 The holy and right-believing Daumantas of Pskov (or Timothy[1], later Dovmont, (Russian: Довмонт, Belarusian: Daǔmont), Christian name Timothy (Russian: Тимофей), (c. 1240? – May 17, 1299), was a Lithuanian princeling best remembered as a military leader of the Pskov Republic between 1266 and 1299. During his term in office, Pskov became de facto independent from Novgorod. He is a saint of the Russian Orthodox Church and is commemorated by the church may 20.

Dovmont was born to a pagan noble family in thirteenth century Lithuania. About 1265 he left his country with his family and sought refuge in nearby Pskov. There he was baptized under the name of Timothy. Seeing the bravery and God-given talent of Dovmont, the local people chose him as their prince. For thirty-three years he defended northwestern Russia from pagans, including his fellow Lithuanians, and from the Teutonic Knights. He was noted for his virtue, love of truth, and mercy to the poor. Dovmont was given to prayer and fasting. He reposed in 1299, was interred in Trinity Cathedral in Pskov, and came to be venerated as a saint.