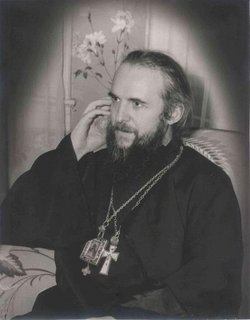 His Eminence the Most Reverend John (Shahovskoy), Archbishop of San Francisco was one of the many émigrés from the Russian civil war who entered a monastic life in the Orthodox Church and became a diocesan bishop in the United States. After first being consecrated Bishop of Brooklyn in the American Metropolia, he was elected Bishop of San Francisco and Western America and Archbishop in 1961, a position he held until his retirement in 1973.

The future Abp. John was born on August 23, 1902, in Moscow, Russia, as Prince Dimitry Shahovskoy. His early education was in St. Petersburg, but it was interrupted by the Revolutions of 1917 and the ensuing civil war. He served with the White Army and was evacuated from the Crimea to France at the end of the civil war. He continued his education at the Louvain University in Belgium, studying history and political economy. During the years 1923 to 1926 he pursued a number of literary adventures including publishing books of his poetry and editing a journal of philosophy and literature.

In 1926, young Dimitry turned to Christ when he entered the Monastery of Panteleimon on Mount Athos. There he made his monastic vows and was tonsured with the name John by Archimandrite Kiryk. From Mount Athos he returned to Paris, France, under the ecclesiastical jurisdiction of Metr. Evlogy (Georgievsky) and studied at the St. Sergius Orthodox Theological Institute. While at St. Sergius he was granted a mantya and was ordained a deacon. Going to Yugoslavia, he was ordained a priest by Bishop Benjamin on March 5, 1927, and was assigned by Metr. Anthony (Khrapovitsky) to Belaya Tserkov. Here Hieromonk John began his life of priestly, missionary, and educational activities. He distributed religious tracts throughout Yugoslavia through a publishing house that he established. These activities attracted many young Russian refugees to the Church but also provoked controversy with Metr. Anthony.

This led the missionary hieromonk to return to France, where Metr. Evlogy assigned him to Berlin, Germany. Here his missionary and educational work continued, reaching far beyond the boundaries of his parish. In 1935 he was elevated to hegumen and to archimandrite in 1937. As the Second World War enveloped him and his parish, Archimandrite John and his parish found themselves helping many of the "workers from the East," that is, forced laborers from Russia and the Ukraine, as well as refugees. Also, they assisted missionaries in the German-occupied areas of the Soviet Union in their efforts to re-open churches that were closed under Soviet persecution of religion.

In 1946, Archimandrite John came to the United States and was assigned to the Holy Virgin Mary Church in Los Angeles, California. In Los Angeles he organized the Orthodox people to help refugees from Europe with food and clothing as well as helping arrange sponsorship for refugees coming to the United States as "displaced persons." On May 11, 1947, Fr. John was consecrated Bishop of Brooklyn and was appointed dean of St. Vladimir's Seminary in New York City. It was at this time that he began his ministry of forty years as a religious broadcaster to the Soviet Union.

In 1950, he was elected bishop of San Francisco, the see in which he remained until his retirement in 1973. Bishop John represented the American Metropolia from 1954 to 1966 on the Central Committee of the World Council of Churches. In 1961, he was elevated to the rank of Archbishop. Through his work with the Council he developed contacts that would be instrumental in the re-establishment of canonical relations between the Metropolia and the Church of Russia, ultimately resulting in the granting of autocephaly to the Metropolia as the Orthodox Church in America.

Although Archbishop John retired in 1973, he was called back to active ministry in his diocese in 1975, but finally retired in 1979. While in retirement he remained active in Russian literary and ecumenical circles. Archbishop John was the author of many books and articles. He often employed the pen name of Strannik in his writings. He died on May 30, 1989, in Santa Barbara, California, and was buried at the Serbian Cemetery in San Francisco.