From OrthodoxWiki
Jump to: navigation, search
This article or section needs to be brought in conformity to standard English, possibly due to having been translated from another language or being written by someone for whom English is not a primary language. You can help OrthodoxWiki by editing it.

The Studenica Monastery, built in the late 12th century, is near city of Usce in the valley of Studenica River in central Serbia.

Founded in 1186, the Monastery of Studenica, which is dedicated to the Presentation of the Holy Virgin, is the mother-church of all Serbian temples. The first stage of work on the monastery was completed by the spring of 1196, when its founder Stefan Nemanja (St. Simeon Nemanja) abandoned his throne, and became a monk. Nemanja's third son St. Sava molded Studenica into the political, cultural, and spiritual center of medieval Serbia. He founded within its walls crucial institutions such as the first organized hospital and school[1]. Studenica was continually expanded by the members of the Nemanjic dynasty. King Radoslav, grandson of the founder added an exonarthex to the church in 1235. King Milutin built a small chapel dedicated to Ss. Joachim and Anna in 1314.

During the Turkish occupation the monastery was desecrated by conversion to a storage building and even a stable. It was also damaged by fire and earthquake. Smaller restoration efforts happened throughout its history. A major restoration effort occurred in modern times, between 1963-1989.

Monastery of Studenica celebrated its 800th anniversary in 1986.

The Virgin's Church is a domed single-nave basilica. At its eastern end there is a three-sided apse, while the narthex faces west. There are also vestibules on the north and the south sides of the building. In 1235, a large exonarthex was added, though with much poorer workmanship and stone quality. The main facades were built with slabs of locally quarried white marble. Externally, the Church harmoniously reconciles two architectural styles, the Romanesque and the Byzantine. The blending of these two styles has produced a particular style of architecture known as the Raska School.[2]

The oldest frescoes within the monastery complex can be found in the Church of St. Nicholas, which date to the early twelfth century. However, the knowledge about their origin is lacking.

The initial fresco layer in the main church was designed by St. Simeon Nemanja and St. Sava. The frescoes were finished in 1208 by painters from the Constantinople school. Two frescoes from this period have survived in excellent condition. These best represent the style and the ideas of the initial decoration. These include the Monumental Crucifixion and the fresco Mother of God of Studenica.

Mother of God of Studenica fresco represents symbolically the spiritual mother of the newly fledged Serbian state. In its signage and name it contains a religious, political, and ideological statement of a new state. First, the inscription is in the Serbian language, cyrillic "Studenicka Holy Mother of God", not usual Greek "MHTHR QEOU". The fresco signage in Cyrillic in the churches was done in the territory of the archiepiscopacy of Ohrid before Constantinople gave independence to the Church of Serbia as a challenge its jurisdiction. Another novelty was the very name Studenicka (meaning: of Studenica), which confirms the creation of a national cult regarding the icon of the Mother of God that strove toward ecclesiastical independence, which did follow.[3] 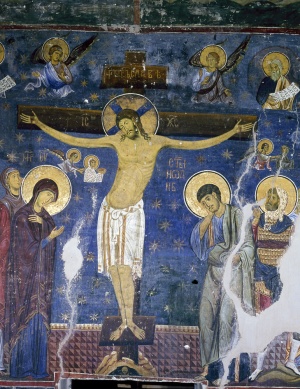 The fresco of the Crucifixion dominates the whole Western wall of the main chapel. Here is seen the style of St. Sava who wanted to represent important ideas in proportional physical size, and there is no greater message in Christianity but the Crucifixion of Christ. While most other Studenica frescoes of the time follow more reserved appearance, in the Crucifixion one can see clearly emotional figures that point to the development of a new style in century to come.

The frescoes in the King's Church were painted during 1310s. The main theme is a number of narrative frescoes about the Ss. Joachim and Anna and the Holy Virgin. They serve not only a religious purpose but are educational tools as well. A great example is the Nativity of the Virgin. In addition to describing the Biblical story, the fresco shows and has been used to teach proper hygienic practices.[4]

Major repainting of the lost or heavily damaged areas was done in 1569.