This article is about an architectural feature related to church buildings.

The apse is a recessed extension on the eastern, or altar end, of Christian churches. It is usually semicircular in plan form but is also found in polygonal and rectangular forms. Apse comes from the Latin ‘’absis’’ meaning arch or vault. 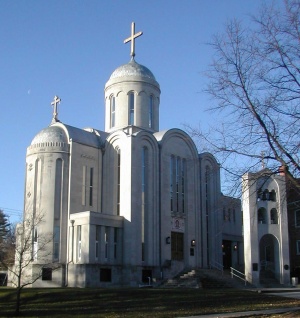 In antiquity the apse was a feature of the secular Roman basilica that was used by Roman officials and magistrates. The area of the apse in the secular buildings often was raised, to provide a sense of importance and judgment for this area where official business was conducted. Since the form of the basilica fit the needs for Christian assemblies, the basilica quickly became the prototype for Christian churches. In Orthodox churches the apse is located at the eastern end of the building and includes the altar on a raised platform, called the bema.

Although the external shape of the apse varies among Christian churches, its interior is generally semicircular capped with a half dome shaped ceiling. Among Orthodox Christians the apse became the focus of iconography presented in mosaic, fresco, and painted media. In the Byzantine east, churches appeared frequently with multiple apses, three being the most common. Many examples are found in church ruins in Palestine from the fifth century on through the Crusades.

In western Europe, the architectural treatment of apses varied. In England, among Gothic architectural representations square terminations of the apse are common. Beginning in thirteenth century France multiple apses were built as radiating chapels. The appearance of the triple apse on churches in western Europe was considered as a mark of Byzantine influences.