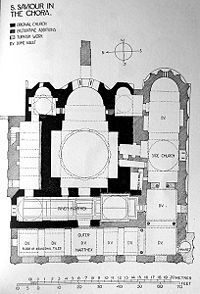 Floor plan of the Chôra church in Istanbul showing a two part narthex.

The narthex may sometime consists of two parts, an exonarthex (outer narthex) that forms the outer entrance to the building and parallel to it another part called the esonarthex (inner narthex) that opens into the nave.

Many early churches were built in the form of the old Roman basilica. Entrance to the western end of the church was through an outside area called the atrium into the narthex. The narthex was either an external structure similar to a porch or inside as a part of the nave but separated from it by a screen or rail. The narthex was used by catechumens and penitents who were not admitted into the nave. Often a baptismal font was also placed in the narthex.

Traditionally, this vestibule serves as a buffer between the world and the Kingdom as represented by the church building proper. There are also certain rites which are conducted in this part of the church, such as the exorcisms which precede the sacrament of Baptism, the betrothal at weddings, and in some Orthodox communities the prayers of churching after birth. On designated occasions certain Vesperal prayers and rites are also celebrated here.

Most often in this this area, the faithful offer a brief prayer, buy a candle and then enter the nave to venerate the icons prior to joining the congregation.

In time the atrium passed into disuse and reforms ended the exclusion of those who were not full members of the church. After this, the nature of the narthex changed to that of a vestibule or a porch. In some church buildings even the vestiges of the narthex disappeared, with entrance to the nave of the church occurring immediately upon entering.