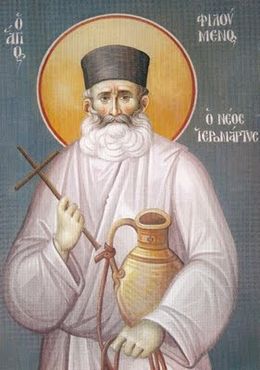 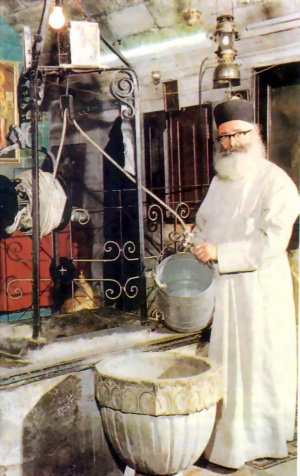 St. Philoumenos was murdered on 29 November 1979. His assailant, Asher Raby (spelled "Rabi" in some newspaper accounts), a mentally ill 37-year-old resident of Tel Aviv, had intruded the monastery, threw a hand grenade inside, which caused substantial damage. Philoumenos is said by investigators to have been fleeing the explosion and fire caused by the grenade when he was pursued by Raby and hit multiple times with an axe. Investigators stated that Philoumenos appeared to have been trying to protect his face with his hands when a blow to his face or head severed the one finger on each hand. Raby escaped the scene of the crime undetected. Raby was subsequently found to have acted alone, "without any connection to a religious or political entity."[6]

An investigation launched by the Israeli police initially failed to identify the killer. Raby was arrested on 17 November 1982 as he again attempted enter the Monastery at Jacob's Well illicitly by climbing over a wall; he was carrying hand grenades. Raby supplied the police with accurate details of his earlier, previously unsolved, crimes. These were the murder of Fr. Philoumenos; a March 1979 murder of a Jewish gynecologist in Tel-Aviv; the murder of the family of a woman in Lod, Israel in April 1979 who claimed to have clairvoyant powers; and an assault on a nun at the Jacob's Well holy site in April 1982.[6] The nun was seriously wounded in the attack. Both she and the gynecologist were attacked by axe, according to prosecutors.[7]

Raby, a newly religious Jew,[8] was described as unwashed, dressed in worn-out clothing, and audibly muttered passages of scripture in a strange manner. Psychiatric evaluations found that he was mentally incompetent to stand trial; he and committed to a mental hospital; details of his subsequent whereabouts are restricted by privacy regulations.[6] At a court hearing after his arrest, an Israeli prosecutor told the court that Raby was convinced that the monastery was the site of the ancient Jewish Temple, and that he made an attempt on the life of the nun "in response to a divine command."[9]

Initial accounts depicted the murder as an anti-Christian hate attack carried out by a group of Jewish settlers, the result was what Maariv described as "a wave of hatred" in Greece. Reports indicating that “radical Jews” had tortured Philoumenos and "cut off the fingers of his hand" before killing him had appeared in Greek newspapers. Maariv also quoted an official in the Greek Orthodox Patriarchate in Jerusalem asserting that “the murder was carried out by radical religious Jews” claiming that “the Well does not belong to Christians but to Jews”.[6] 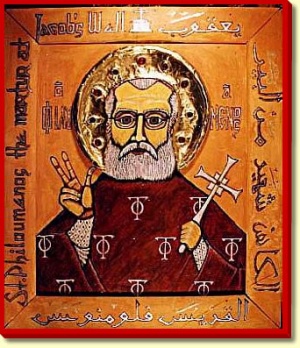 In a 2017 article in the journal Israel Studies, researchers David Gurevich and Yisca Harani found that false accounts blaming the slaying on "settlers" and "Zionist extremists" persisted even after the arrest of the assailant and his confinement in a mental institution, and that there were "patterns of ritual murder accusation in the popular narrative." The same theme was echoed in parts of the Eastern Orthodox community and by some secular sources, including Blackwell's Dictionary of Eastern Christianity, the Encyclopedia of the Israeli-Palestinian Conflict, The Spectator and Times Literary Supplement, as well as Wikipedia.[6][10][11][12]

Gurevich and Harani contended that a 1989 account of the murder, published in Orthodox America, a publication of the Russian Orthodox Church Outside Russia, became the basis of an anti-Semitic ritual murder narrative, according to which a group of anti-Christianity Jews first harassed Philoumenos and destroyed Christian holy objects at the monastery, then murdered him.[6] 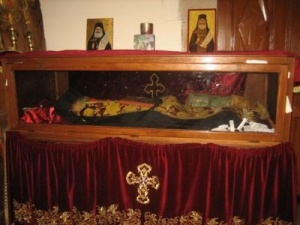 On November 17/30, Patriarch Diodorus of Jerusalem, accompanied by various Greek bishops, archimandrites, clergymen and monastics, opened the grave. The coffin was reverently removed from its grave in the cemetery of the Brotherhood of the Holy Sepulcher on Mount Sion, and, when the shroud was lifted off, the relics were found to be substantially incorrupt. The remains were rinsed with wine, and then wrapped in a sheet. A short requiem service was then chanted.[13] His body was then placed in a glass shrine in the northern part of the sacred Holy Altar in Mount Zion.[note 5][4]

Hieromartyr Philoumenos was ranked among the Saints of the Church of Jerusalem on August 17/30, 2008, and from that time, his incorrupt body was transferred to the pilgrimage site of Saint Jacob's Well where he had found martyrdom for the love of Christ.[4][note 6]

The Lord has seen fit to allow our generation of Christians to have martyrs of its own. It is without a doubt that the blood of murdered Orthodox Christians such as Archimandrite Philoumenos in the Holy Land, Hieromonk Vasily and the two Optina monks in Russia and Brother Jose Munoz in the West, is today’s "seed", which is ripening and will produce a harvest in Christ's Vineyard.[14] 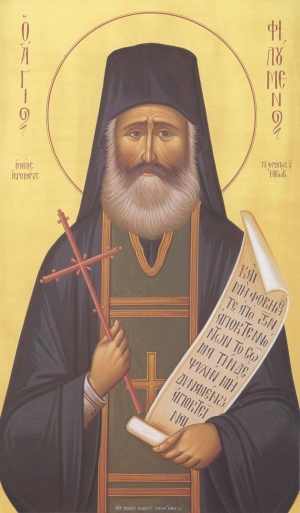 TROPARION (Tone 3)
Vanquisher of daemons,
dispeller of the powers of darkness,
by thy meekness thou hast inherited the earth
and reignest in the Heavens;
intercede, therefore, with our Merciful God,
that our souls may be saved.[13] 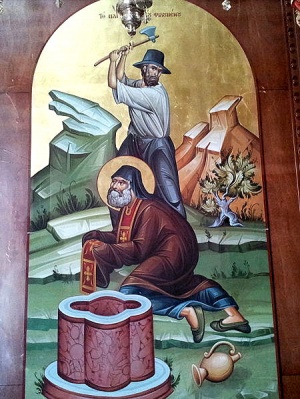