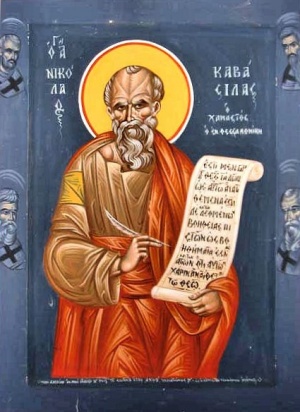 Our father among the saints Nicholas Cabasilas (born 1322 in Thessaloniki and died sometime after 1391) was a well known theological writer and mystic of the Orthodox Church. He was born in Thessaloniki and, as a young man, was involved in politics. Little is known of his later life, however, he is remembered for his two treatises, Life in Christ and The Exposition of the Divine Liturgy. These volumes are generally regarded as classics of Eastern sacramental theology.

He was on intimate terms with the emperor John VI Cantacuzenos, whom he accompanied in his retirement to a monastery. In 1355 he succeeded his uncle Nilus Cabasilas, like himself a determined opponent of the union of the Greek and Latin churches, as archbishop of Thessaloniki. In the Hesychast controversy he took the side of the monks of Mount Athos and St. Gregory Palamas. He is commemorated by the Church on June 20.[1]