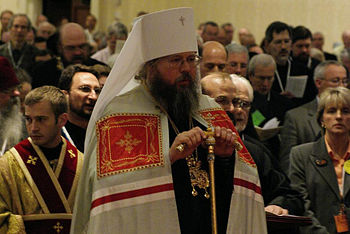 His Eminence, the Most Reverend Jonah (Paffhausen) of Washington was the primate of the Orthodox Church in America (OCA) until the Holy Synod of Bishops requested and accepted His Eminence's resignation on July 7, 2012. He was elected as metropolitan on November 12, 2008, and was formally enthroned on December 28, 2008, in Washington, D.C. Metr. Jonah is also the first convert to the Orthodox faith to be elected as the OCA's primate.

Hmk. Jonah returned to his home state of California, serving a number of mission parishes there and later given the obedience to establish a monastery. In 1996, St. John of San Francisco Monastery was founded in Point Reyes, California (later moving to Manton). During his tenure as abbot, Fr. Jonah grew the monastic community to more than fifteen members. In 1995, as a new priest, he was initially assigned to the existing Saint Mary Magdalene mission parish in Merced, CA by Bishop Tikhon (Fitzgerald). He later worked to establish Californian missions in Sonora, Chico, Eureka, Redding, and Susanville, among others, and in Kona, Hawaii.

In 2008, Fr. Jonah was elevated to the rank of archimandrite and was then sent from the monastery to take on the duties of being an auxiliary bishop for the OCA's Diocese of the South. In September of that year, he was officially elected to that position, and then on November 1 consecrated in Dallas as Bishop of Fort Worth, led by Abp. Dmitri (Royster) of Dallas, then locum tenens of the OCA's metropolitan see.

Eleven days later, on November 12, Bishop Jonah was elected Metropolitan of the OCA at the 15th All-American Council of the Orthodox Church in America in Pittsburgh. His formal enthronement in Washington, D.C., was on December 28, 2008, at St. Nicholas Cathedral.