Diocese of the South (OCA) 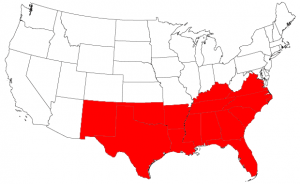 Visual representation of the Diocese of the South

The Diocese of the South is a diocese of the Orthodox Church in America. It is currently under the leadership of His Grace, the Right Reverend Alexander (Golitzin), who was enthroned as bishop of the diocese on June 11, 2016. Its territory includes Alabama, Arkansas, Florida, Georgia, Kentucky, Louisiana, Mississippi, North Carolina, New Mexico, Oklahoma, South Carolina, Tennessee, Texas, and Virginia outside the Washington DC metropolitan area.