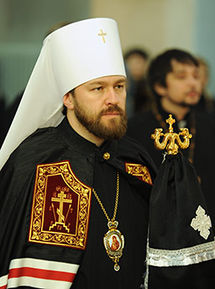 His Eminence, the Most Reverend Metropolitan Hilarion (Alfeyev) of Volokolamsk (born Grigoriy Valerievich Alfeyev, 24 July 1966) is a hierarch of the Church of Russia, theologian, church historian and composer. At present he is the Metropolitan of Volokolamsk, the chairman of the Department of External Church Relations and a permanent member of the Holy Synod of the Patriarchate of Moscow. He is also the author of several volumes on dogmatic theology, patristics and church history, numerous articles in various languages, and musical compositions for choir and orchestra.

In January 1987 he entered the Monastery of the Holy Spirit in Vilnius, Lithuania, where he was tonsured as a monk on June 19, ordained a deacon on June 21 and ordained a priest on August 19 of the same year.[1]

Until 1991 he had also served as a parish priest in Lithuania, including two years as dean of the Annunciation Cathedral in Kaunas.

From 1993 to 1995 he studied at Oxford University (UK) under the supervision of Bishop Kallistos (Ware) of Diokleia. In 1995 he completed his doctoral thesis on St Symeon the New Theologian and Orthodox Tradition and was awarded the degree of Doctor of Philosophy.

From 1995 to 2001 Hilarion Alfeyev served as Secretary for Inter-Christian Affairs of the Department for External Church Relations of the Moscow Patriarchate. He also taught part-time at Smolensk and Kaluga Theological Seminaries (Russia), at St Vladimir's and St Herman's Theological Seminaries (USA), as well as at Cambridge University (UK).

On December 27, 2001, he was elected bishop and on January 14, 2002, consecrated by His Holiness Alexy II, Patriarch of Moscow and all Russia, and 10 other hierarchs. He served as an Assistant Bishop of the Diocese of Sourozh in Great Britain until his nomination, on July 17, 2002, as Head Representative of the Russian Orthodox Church to the European Union in Brussels, Belgium.

On May 7, 2003, he was appointed Bishop of Vienna and Austria, administrator of the Diocese of Budapest and Hungary, in addition to his position in Brussels, which he continues to hold.

On March 31, 2009 he was appointed the Bishop of Volokolamsk, the Vicar to the Patriarch of Moscow, the chairman of the Department of the External Church Relations (the position previously held by Patr. Kirill himself), and a permanent member of the Holy Synod ex officio.

On Pascha Monday, 2009, he was raised to the rank of Archbishop by Patriarch Kyrill during the Divine Liturgy in the Dormition Cathedral in Moscow.

In November 2009, Archbishop Hilarion was named to the Board of Trustees of St. Vladimir's Orthodox Theological Seminary in Crestwood, New York.

On February 1, 2010, he was elevated to the rank of Metropolitan by Patriarch Kyrill.

Metropolitan Hilarion is author of more than 600 publications, including at least ten volumes in English:

Apart from his doctoral degree in philosophy from Oxford, Metropolitan Hilarion also holds a doctorate in theology from St Sergius Orthodox Theological Institute in Paris, which was awarded to him in 1999. In February 2005 he was elected a Privat-Dozent of the University of Fribourg (Switzerland).

Metropolitan Hilarion is the author of numerous musical compositions. His St Matthew Passion, grand oratorio for soloists, choir and orchestra, received a standing ovation at its performances at the Great Hall of Moscow Conservatory (March 27, 2007)[2], at the Auditorium Conciliazione in Rome (March 29, 2007)[3], and at St Patrick's Cathedral in Melbourne (September 28, 2007).

Equally well received was his Christmas Oratorio, performed in Washington, Boston and New York (December 18-20, 2007) and later in Moscow (January 7 and 15, 2008), as well as his Stabat Mater, which had its world premiere in January 2012 under the direction of Vladimir Spivakov. 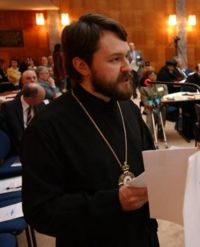 Bishop Hilarion speaks to the Central Committee of the World Council of Churches.

Bishop Hilarion is a member of the Executive and Central Committees of the World Council of Churches, of the Presidium of 'Faith and Order' Commission, as well as of numerous bilateral theological dialogues. In 1998 he headed the five-member Moscow Patriarchate's delegation to the eighth WCC Assembly in Harare, and in February 2006 he headed the Moscow Patriarchate's 21-member delegation to the ninth assembly in Porto-Alegre.

He is also interested in interfaith dialogue among all major world religions, and currently sits on the Board of World Religious Leaders for the Elijah Interfaith Institute.[4]

On October 10, 2007, Bishop Hilarion walked out of an important meeting of the Orthodox-Roman Catholic International Theological Commission at Ravenna, allegedly in protest against the choice of delegates by the Ecumenical Patriarchate. His action was approved by the Holy Synod of the Russian Orthodox Church.

On October 5, 2008 he took part in the "Bible Marathon" organized by the Italian state TV channel RAI-Uno.[5] He read Chapter Two from the Book of Genesis, immediately following Pope Benedict XVI, who read Chapter One. Alfeyev was followed by 1246 readers from various countries.

In September 2009, at the invitation of Cardinal Walter Kasper, he visited Pope Benedict XVI and several officials of the Roman Curia who have key roles in Roman Catholic ecumenical dialogue.[6]

Late in 2010, Metropolitan Hilarion gave an important speech to senior Anglican bishops and professors at the Nikean Club dinner at Lambeth Palace, criticizing proposals for the ordination of women bishops and the alleged toleration of homosexual activity by some Anglicans.[7]

Orthodox and Anglican Churches are on different sides of the abyss, says Russian Orthodox leader.