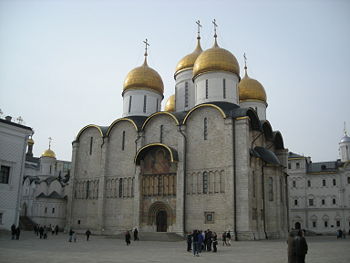 Cathedral of the Dormition - Uspensky Sobor, Kremlin in Moscow, Russia

Dormition Cathedral (Russian: Успенский Собор, Uspensky Sobor) is the mother church of the Church of Russia. The church stands on the Cathedral Square in the Kremlin of Moscow. It was built between 1475 and 1479 by the Italian architect Aristoele Fioravanti di Rodolfo.

The present day Dormition Cathedral had it origins in the fourteenth century when Prince Ivan I (Kalita - moneybags) of Moscow had the first Dormition cathedral built in 1327 as the seat of Metropolitan Peter, who was Metropolitan of Kiev. Metr. Peter had first moved his seat from de-populated Kiev to Vladimir and then, in 1326, to Moscow. Ivan I’s cathedral, with a single dome, was built on Borovitsky Hill, part of what now is the Moscow Kremlin, and was the first masonry building in Moscow.

By the middle of the fifteenth century the cathedral was deteriorating, and Metr. Philip I started the construction of a replacement. Construction of the new cathedral, built under Pskov architects Kryvtsov and Myshkin, was begun in 1472 during the rule of Grand Prince Ivan III. However, in 1474, a very rare earthquake in Moscow caused the incomplete cathedral to collapse.

Ivan III, next, turned to the Italian architect Aristoele Fioravanti di Rodolfo of Bologna, Italy and invited him to build a new cathedral that would be modeled after the thirteenth century Cathedral of the Dormition in Vladimir, Russia. Fioravanti took the five domed Vladimir design, added Renaissance proportions and engineering, to construct the Dormition Cathedral that exists today. Minor changes were made during the seventeenth century. The foundation of the cathedral was laid in 1475, and the building was completed in 1479 and, then, consecrated by Metr. Geronty on August 12, 1479. Frescos were painted during the years from 1481 to 1515. Among the low tiers of the iconostasis is the twelfth century Vladimir icon of the Mother of God.

Situated within the fortified area of the Kremlin of Moscow, the Dormition Cathedral soon became the center of imperial life of the Russian nation as well as the first of the cathedrals that now form Cathedral Square. In 1547, Ivan IV, characterized now as ‘’the terrible’‘, was crowned in Dormition cathedral as the first tsar of Russia. The coronation of the emperors and empresses of Russia continued to take place in the cathedral until the abdication of the last tsar, Nicholas II. The installation rites of the ruling Metropolitans and Patriarchs of the Church of Russia were also held in cathedral as well as being their final resting place.

During the dying days of tsarist Russia, the cathedral became the scene of the installation of the first patriarch of the Russian Orthodox Church since the patriarchate was abolished by Emperor Peter I in the early eighteenth century. On November 21, 1917, the Metropolitan of Moscow, Tikhon (Belavin) was installed as patriarch. The Pascha service of the following Spring was the last religious service in the cathedral until the cathedral was returned to the Russian Orthodox Church in 1990, as the Soviet Union was falling.