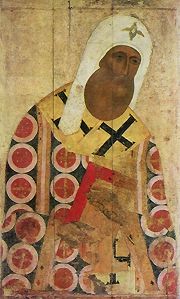 Peter, Metropolitan of Moscow and all Russia

Our father among the saints Peter, Metropolitan of Moscow and all Russia (Пётр in Russian, d. 1326) was the Russian metropolitan who moved his see from Vladimir to Moscow. Later he was proclaimed a patron saint of Moscow. His commemoration by the Church is December 21 and August 24.

Peter was born in Halych-Volynia of pious parents, Theodore and Eupraxia. At the age of twelve, Peter entered a monastery. He successfully studied the book sciences of those times and eagerly fulfilled his monastic obedience. Because of his virtuous and ascetic life, the igumen of the monastery had St Peter [[ordination}ordained]] as a hieromonk. After years of ascetic labors at the monastery, the Hieromonk Peter, with the blessing of the igumen, left the monastery in search of a solitary place.

He founded a monastery on the Rata River (Western Bug's tributary) and began to pursue asceticism in silence. Afterwards, at the place of his ascetic exploits, a monastery was formed, called the Novodvorsk. A church dedicated to the Savior was built for the monks who came to him. Chosen as igumen, St Peter guided his spiritual children, never becoming angry with a guilty monk. In 1308 King George of Galicia nominated him, and the patriarch of Constantinople appointed him, to the vacant see of Kiev and all Rus.

Mikhail Yaroslavich, Grand Prince of Vladimir and Tver, wanted to advance his own candidate for this position. Peter's nomination caused prolonged animosity between Mikhail and Peter, to the point that the latter had to ask for protection from the Muscovite princes.

Peter's alliance with Moscow helped assert his own authority and contributed to the rise of the House of Moscow. Peter transferred his metropolitan's duties from Vladimir to Moscow, where he received property and estates. The move strengthened the political position of Moscow and established it as the spiritual capital of a defragmentated Russia.

After Peter's move to Moscow, the Cathedral of the Dormition and several other stone churches were built by Ivan Kalita in the Moscow Kremlin. The foundation of the Vysokopetrovsky Monastery in Moscow is ascribed to St Peter. He also authored a few sermons and epistles.

After his canonization by Metropolitan Alexis, his veneration was propagated all over Moscovy. Accordingly, many churches were dedicated to Peter the Metropolitan in Moscow and other cities of Russia. The Russian Chronicles mention him frequently, and no significant state undertaking was initiated without prayers at the grave of St Peter. The relics of St Peter were transferred in 1472 and 1479. In memory of these events, his feast days were established for October 5 (the Synaxis of the Hierarchs of Moscow) and August 24.

O Russian Hierarchs,
Guardians of the Apostolic tradition,
Firm pillars, guides of Orthodoxy,
Peter, Alexis, Jonah, and Philip,
Pray to the Lord of all,
To grant peace to the world and great mercy to our souls.

You were holy as hierarchs;
You taught the people and you were well-pleasing to God.
He has glorified you with incorruption and miracles
As disciples of the grace of God.