Synaxis of the Hierarchs of Moscow 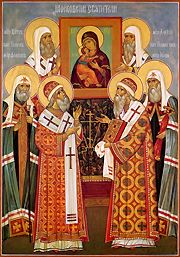 Synaxis of the Hierarchs of Moscow

The Synaxis of the Hierarchs of Moscow is a commemoration of the holy hierarchs of the metropolitanate of Moscow. It occurs each year on October 5.

Commemorated on October 5, a celebration of a special day to honor Saints Peter, Alexis, Jonas the Metropolitans and Wonderworkers of All Russia was established by Patriarch Job on October 5, 1596.

In 1875, St Innocent, Metropolitan of Moscow (March 31 and October 6), proposed that St Philip be included with the others.

St Hermogenes was added only in the year 1913.

By celebrating these hierarchs on a common day, the Church offers each of them equal honor, as heavenly protectors of the city of Moscow and prayerful intercessors for Russia.

O Russian Hierarchs,
Guardians of the Apostolic tradition,
Firm pillars, guides of Orthodoxy,
Peter, Alexis, Jonah, and Philip,
Pray to the Lord of all,
To grant peace to the world and great mercy to our souls.

You were holy as hierarchs;
You taught the people and you were well-pleasing to God.
He has glorified you with incorruption and miracles
As disciples of the grace of God.