Cornelius of the Pskov Caves

Our father among the saints Hieromartyr Cornelius of the Pskov Caves was the abbot of the Pskov-Caves Monastery during the middle decades of the sixteenth century. During his tenure he brought the monastery through its prime years. He was martyred through the hands of Tsar Ivan IV when Cornelius came to greet the visiting, but irate, tsar, at the gates of the monastery. He is commemorated on February 20.

Cornelius was born in Pskov, Russia in 1501 into a noble family. His parents, Stephen and Maria, sent him to the Mirozhsky Monastery in Pskov for an education. Under the guidance of an Elder, Cornelius studied his letters, transcribed and adorned books, made candles, painted icons, and chopped wood. When he returned home after finishing his studies, he did so with a resolve of becoming a monk.

During his early years, Cornelius was taken by a government clerk to the Pskovo-Pechersky Monastery (Pskov-Caves Monastery) to the west of Pskov. While the monastery facilities were cruder than any church in Pskov, Cornelius was struck by the natural setting of the monastery in the woods and of the solemnity of the services in the cave church. This experience made such a strong impression of the young Cornelius that he left the home of his parents and received monastic tonsure at the Pskov Caves Monastery.

At the age of twenty eight, Cornelius was made Igumen and became the abbot of the monastery. Under his leadership, the monastery prospered both spiritually and physically. The brotherhood increased from 15 to some 200 men. His activities extended beyond the precincts of the monastery. Guided by him, the monks of the monastery preached Orthodox Christianity to the Esti (Aesti) and Saeti people living around the monastery. He promoted the building of churches, hospices, and homes for orphans and those in need.

An educated man, Cornelius was a lover of books and established at the monastery an impressive collection. This intellectual interest expanded into the Pskov Caves Monastery taking over the tradition of writing the chronicles from the Spaso-Eleszar Monastery in the mid-sixteenth century. Among these chronicles were the first two Pskov chronicles for the years 1547 to 1567. He himself contributed to this collection. In 1531, Cornelius finished his work, “An Account of the Origins of the Pechersk Monastery.” Also, Igumen Cornelius assembled a great monastery Synodikon in which are remembered the deceased brothers and benefactors of the monastery. He complied a “Description of the Monastery” and a “Description of the Miracles of the Pechersk Icon of the Mother of God.”

Cornelius’ efforts to improve the physical attributes of the monastery were great. He expanded and beautified it in many ways. He enlarged the caves themselves and added, in 1541, a church dedicated to the Annunciation of the Most Holy Theotokos on the site of the older wooden Church of the Forty Martyrs of Sebaste that was moved outside the monastery walls. In 1559, the Church of the Protection of the Most Holy Theotokos was added to the monastery complex. In an area of constant conflict, he directed during the years of 1558 to 1565 the building of a massive stone wall around the monastery, replacing a primitive wooden and earthen wall. At the gate through the wall he had built a stone church dedicated to St. Nicholas built over the gate itself, entrusting the protection of the monastery to him. Within the church was placed a sculpture wooden icon of “Nicholas the Warrior.”

During the Livonian wars of the 1550 and 60s the abbot Cornelius preached Orthodox Christianity to the peoples of the occupied lands and aided the suffering Esti and Livonians casualties of the war. He turned the monastery into a hospital that helped the injured and maimed. In 1560, Cornelius sent on the Feast of the Dormition of the Mother of God prosphora and holy water to the Russian armies besieging the city of Theilin that immediately thereafter resulted in the surrender of the city to the Russians. 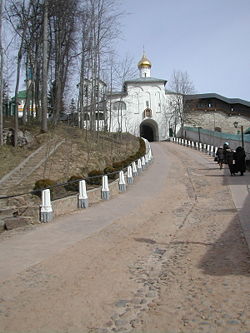 The path along which Ivan IV, the Terrible, carried the body of St. Cornelius from the monastery gate to the Domition Cathedral after he had beheaded the abbot in a fit of rage.

Even in his death, the Holy Cornelius left his mark on the monastery where he had spent most of his earthly life. His martyrdom is recorded in the old manuscripts of the Trinity-Sergiev Lavra, On February 20, 1570, Tsar Ivan IV (the terrible), arrived at the Pskov Caves Monastery in a raging anger over a false slander. St. Cornelius met him at the monastery gates with a cross, where upon Ivan attacked the sainted abbot, beheading Cornelius with his own hands. Ivan immediately became remorseful and repented his deed. Ivan then picked up Cornelius’ body and carried it down the path from the gates to the Dormition Cathedral, making a pathway scarlet with the Saint’s blood, a pathway that became known as the Bloody Path.

The body of St. Cornelius was laid to rest in the wall of “the cave formed by God". Here it remained, uncorrupted, for 120 years until in 1690 Metropolitan Marcellus of Pskov and Iborsk had his relics transferred to the monastery’s Dormition Cathedral and placed in a new crypt in the wall. On December 17, 1872, his relics were again moved to a copper-silver reliquary, and then, again the relics were placed in a new reliquary in 1892.