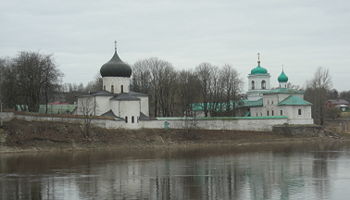 Mirozhsky Monastery on the Velikaya River in Pskov, Russia. Transfiguration Cathedral on the left. St. Stephen the Archdeacon Church on the right

The Mirozhsky Monastery, in Pskov, Russia, is an important Orthodox monastery of medieval origins that is famous for its twelfth century frescos in the monastery’s Transfiguration Cathedral.

Traditionally, Mirozhsky Monastery was founded in the twelfth century, but it may have been established as early as the early 1010s based on a manuscript bearing a thanksgiving list inscription mentioning Prince Svyatopolk of Kiev who was excommunicated from the Church in 1015 for the murder of his brothers, Boris and Gleb. The monastery soon became one of the richest monasteries in Pskov as well as a significant cultural center. It is located on the left bank of the Velikaya River where it meets the smaller Mirozhka River. The oldest building of the monastery is the Cathedral of the Transfiguration of Our Lord commissioned in the late 1130s by Archbishop Nifont of Novgorod when he was in exile from Novgorod. The cathedral is in the typical cross form of Greek churches. The frescos of the Transfiguration Cathedral were painted by artists from Constantinople in mid-twelfth century. Some eighty percent of these frescos have survived the ravages of flooding by the adjacent Velikaya River. Currently, the cathedral is part of the Pskov State Museum-Reserve of History, Architecture, and Art. The cathedral and its frescos are included on the UNESCO list of outstanding architectural landmarks of the world. A second church, the Church St Stephan the Archdeacon, was added to the monastery complex in the seventeenth century. 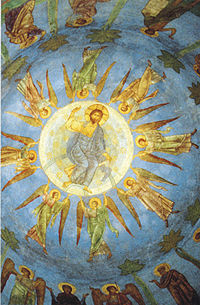 In those ancient times Christianity existed alongside paganism in the frontier around Pskov. Under Abp. Nifont’s leadership, the monastery became the center of an active evangelistic movement among the pagans in the Russian territories. In the monastery, new missionaries were trained in the ideals of Christianity. The monastery provided a place where the missionaries developed their preaching while practicing their personal examples of asceticism. Also in this early era the monastery was a center of chronicle writing.

The monastery was closed by the Bolsheviks in 1922. In 1994, it was returned to the Russian Orthodox Church. Mirozhsky Monastery now supports the Pskov iconographic school, a teaching center for icon painters.