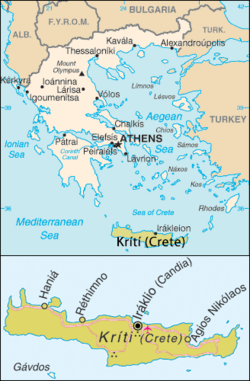 The general Nicephorus Phocas regained control of Crete for the Eastern Roman Empire in 961 under whose administration it would remain until the Venetian invasion of 1204. Candia remained the capital of Crete and became the seat of the Archbishop of Crete. Under the administration of the Ecumenical Patriarchate, the church on Crete was designated a metropolis with its head a Metropolitan who was over twelve bishops. A new cathedral was built in Candia, dedicated again to the Apostle Titus. The site of this cathedral is believed to be that on which the present day Church of the Apostle Titus is located. The names of Elias in the eleventh century, John in the twelfth century, and Nicholas are mentioned as metropolitans. With the Venetian occupation of 1204, Nicholas fled to Nicea, with bishops Gregory of Petra and John of Arcadia. Bishop Paul of Knossos and the unidentified bishops of Herronissos and Agrion remained on Crete.

As agitation for Greek independence gained popular support, the people of Crete revolted against the Turks. In retaliation on June 24, 1821, the Turks conducted a massacre in Herkalion that is remembered by the populace as ‘’o megalos arpentes’’ (the great ravage). Among the victims were Metropolitan Gerasimos Pardalis, and five of his bishops: Neofitos of Knossos, Joachim of Herronissos, Ierotheos of Lambis, Zacharias of Sitia and Kallinikos, and the titular bishop of Diopolis. The see of metropolitan remained vacant for the next two years until the sultan consented, in 1823, to the consecration of Kallinikos of Anchialos as the Metropolitan of Crete. At the same time the bishopric of Knossos was abolished and became part of the metropolis.

Structure and current hierarchs of the archdiocese

Metropolis of Gortyna and Arcadia

Makarios of Gortyni and Arcadia

Metropolis of Rethymnon and Avlopotamos

Evgenios of Rethymnon and Avlopotamos

Metropolis of Kydonia and Apokoronon

Damaskinos of Kydonia and Apokoronon

Metropolis of Lampe, Sybritos and Sfakia

Metropolis of Petra and Cherronisos

Nektarios of Petra and Cherronisos

Metropolis of Arkalochori, Kastelli and Viannos

Andrew of Arkalochori, Kastelli and Viannos