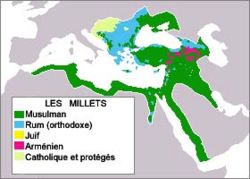 Millets of the Ottoman empire

The Ottoman Empire was formed by turkic people who had migrated from central Asia during the latter part of the first millennium to the Black and Eastern Mediterranean Sea areas. By the late part of the first millennium the Seljuk Turks had established hegemony over ancient Persia and Anatolia. At the end of the thirteenth century Osman I declared his independence from the Seljuk Turks and established himself as the leader of the Ottoman Turks, who took their name after him. Over the following centuries the Ottomans established an empire that encompassed not only the lands of the Seljuk Turks, but extended into and beyond the Balkans in Europe, including the Christian lands of the three ancient Eastern Patriarchs.

The Ottoman Empire lasted from 1299 to 1922. With Constantinople (Istanbul) as its capital city, in many respects it was an Islamic successor to the Eastern Roman (Byzantine) Empire.

The Ottoman Empire in theory tolerated Christians and Jews. Mehmed II allowed the local Christians to stay in Constantinople after conquering the city in 1453, and in 1461 Sultan Mehmed II established the Armenian Patriarchate of Constantinople. Previously, they were seen as heretical.

In terms of policy matters, the empire's relationship with the Greek Orthodox Church was largely peaceful. In practice, however, Christians faced discrimination in every level of society.

Voluntary conversion to Islam was often greeted by Ottoman authorities, and it was no secret that Muslim authorities perceived Islam as a higher form of belief. In addition to this, conversion to Islam meant that those who were formerly Christians did not have to worry about paying the Jizya, a tax that was levied on non-Muslim citizens.

As a result, many Christians in Asia Minor converted en masse for purely economic reasons.