Protection of the Theotokos Church in Osaka, Japan is the temple of the Orthodox Christian community of Osaka. It is a parish of the Diocese of Western Japan of the Church of Japan. 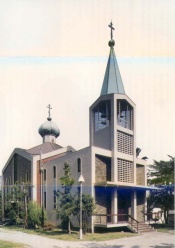 The Orthodox Christian missionaries, dispatched by the Apostle to Japan, Fr. [[Nicholas of Japan|Nicholas (Kasatkin)[[, arrived in Osaka in 1874 to proclaim the Gospel of Jesus Christ. In March 1878, a prayer house was founded when 37 catechumens received baptism and formally founded the church in Osaka. By July 1910, the community had expanded such that a wooden church in the Byzantine style was erected to serve the community. The church was built in the Tenmabashi district of Osaka and was dedicated to the Protection of the Theotokos.

However, the Church of the Protection of the Theotokos was not the first Orthodox church in Osaka as in 1908 a church had been built with the gifts and donations of the Russian captives of the 1904/1905 Russo-Japanese war in the memory of their fallen comrades.

As for many Japanese Orthodox believers in other Japanese cities during World War II, the wooden church of the Protection of the Theotokos was destroyed in June 1945, a victim of the firebombing of Japanese cities during the later part of the war. Until the early 1960s, the community of faithful were served by temporary facilities until a new church was built.

In April 1962, the parish began using a new church dedicated to the Protection of the Theotokos at its present site in Osaka. The church, of a Byzantine style, was constructed of reinforced concrete. The iconostasis was originally one that was donated by Kseniya Fedorovna Kolesnikova of Moscow for the Matsuyama church on Shikoku island, and was given to the Osaka church from Tokyo after the Matsuyama church had been moved there. The icons on the iconostasis were painted by Gur'yanov, a Moscow iconographer. Additionally, Protection of the Theotokos Church is the holder of icons of the Last Supper and the Theotokos painted by the Japanese iconographer Irina Yamashita (Rin). The new church inherited a set of bells donated to the church in 1910 by Ioann Andreevich Kolesnikov of Moscow. Of these, however, two are replacements for bells requisitioned by the government during World War II.

Among the early members of the Osaka parish was Pavel Nakai (Tsugumaro). He was a professor, Chinese scholar (Kangaku-sha) , and last dean of Kaitoku-do, the Edo-period public university of Osaka that now continues as the Osaka University. Professor Pavel assisted Bishop Nicholas in his translations of the Holy Bible, liturgical writings, and prayers into the Japanese language.