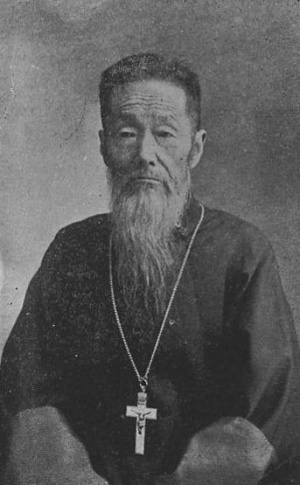 Fr. Paul Sawabe
Takuma Sawabe was born in 1833 in Kochi prefecture. His original name was Yamamoto Kazuma. He was a student, with a cousin, of the samurai art of Ken-do (Japanese swordsmanship) and philosophy. In 1857, while walking off some heavy drinking, Yamamoto ended up with two watches stolen by his cousin, but which he tried to sell. Yamamoto fled to Hakodate to escape the police who had identified him as having stolen the watches. In Hakodate, Yamamoto married the daughter of a Shinto priest named Sawabe. Yamamoto, after marrying the priest's daughter, became an adopted son of the priest and changed his name. Under his new identity Takuma Sawabe did not participate in the Shinto priesthood, but led a group that reverenced the Emperor and demanded expulsion of the foreigners. The Russian Consulate in Hakodate became a target of their plan for assassinations.

One night in 1865, armed with a sword, he confronted the Hieromonk Nicholas with the intent of killing him before he did any preaching. In the exchange of words that followed, Nicholas questioned why Sawabe would kill him without hearing about what Nicholas would have to say. So, Sawabe asked Nicholas to tell him about his Christian religion. As the young missionary talked, his words softened Sawabe's heart, his interest increased, and he began to study the Christian doctrine. Soon, Sawabe was joined by a doctor friend, Sakai Tokurei, in a discussion group. They in turn were joined by two more friends, Urano and Suzuki, and so the group of catechumens grew. They themselves began teaching about Orthodox Christianity to other Japanese people. Yet at this time, the Japanese policy was still to persecute Christians and forbid conversion to Christianity.

Then in April 1868, with the Reader Bissarion Sartoff guarding the consulate office door, Nicholas baptized Sawabe, Sakai, and Urano with the baptismal names for Paul, John, and James respectively. They had become the first Japanese people to accept Orthodox Christianity. With their baptism Paul and his friends went on to preach their new religion more fervently.

As the threat of imprisonment and perhaps even execution increased in the Hakodate area, Hieromonk Nicholas sent Paul and his friends to travel else where in Japan to preach their new faith, but ultimately to gain greater safety for them. Not hearing from Paul for some months, Hieromonk Nicholas was very glad to receive news from Paul of his successes in Sendai, in northern Honshu. In time the opposition to Christianity subsided, and the now Archimandrite Nicholas began to look to expanding his missionary work to Tokyo.

It was Paul Sawabe whom Nicholas sent to Tokyo to review the situation for missionary work in the Tokyo/Yokohoma area and advise him of the potential for such work there. Paul's report was one of optimism, and Paul advised Nicholas to come to Tokyo as soon as possible. So, in late January 1871, Archimandrite Nicholas arrived in Yokohoma and proceeded to Tokyo to set up his headquarters.

Local opposition to Christianity was still present. In February 1872, Paul Sawabe and many of his co-workers in Christ were arrested by the local police in Sendai. The officials were amazed that even among the children their answers to questioning showed a deep conviction to their Christian beliefs. Even though many had not been baptized none changed their position but were strengthened in their faith.

On July 12, 1875, at the second General Council of the Japanese mission, Archimandrite Nicholas decided that there was a need for native clergy, and named Paul Sawabe to be the first priest, and that John Sakai would be a deacon. A month later Bishop Paul of East Siberia came to Hakodate for the first sacraments of the Holy Orders in Japan and ordained the new priest and deacon.

Paul Sawabe continued to service his new faith as his church grew over the following decades. He was to survive his mentor and bishop by a year, dying in 1913.