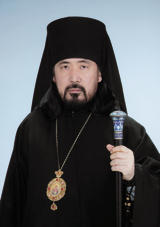 Archbishop Seraphim (Tsujie) of Sendai is the ruling bishop of the Diocese of Sendai and Eastern Japan of the Church of Japan.

Choosing to become a monastic, Fr. Noboru was tonsured a monk with the name Seraphim on August 20, 1999. He was elevated to the dignity of hegumen on September 6, 1999, and then to archimandrite on January 9, 2000. His consecration as Bishop of Sendai was on January 15, 2000.

His diocese suffered greatly from the great earthquake of March 11, 2011, particularly from the resulting great tsunami that followed. The Church of the Annunciation in Yamada-cho, that was destroyed after the tsunami and fire, was among the most seriously damaged church property. Fortunately the death toll among the Orthodox Christians was limited with a report of eight deaths.[1]

On July 8, 2012, by the decision of Council of the Japanese Orthodox Church, he was elevated to the dignity of archbishop.