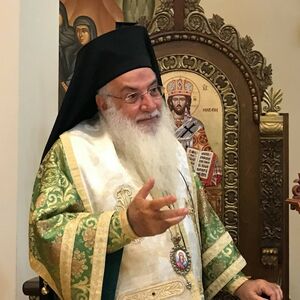 His Eminence Makarios of Nairobi

His Eminence, the Most Reverend Makarios (Tillyrides) is the Archbishop of Nairobi and Exarch of All Kenya, part of the Church of Alexandria. His Eminence is credited with the establishment of three suffragan dioceses under his omophorion, Nyeri, Kisumu and Eldoret.

In 1945, the future archbishop was born Andreas Tillyrides in Limassol, Cyprus. He studied extensively before entering the clergy. In 1968, he began his studies on Theology at the Orthodox Theological Institute of St. Sergius in Paris, France, graduating in 1972. While pursuing his education in Paris, he also studied at the College of France and Byzantine History at the Ecole Practique des Hautes Etudes at the Sorbonne in Paris. In September 1972, he continued post graduate studies in Church History under His Eminence Kallistos (Ware), then Bishop of Dioclea (1982–2007), at Oxford University in Great Britain, receiving a Doctor of Philosophy degree in 1976.

He continued his post-doctoral education as a research student at Louvain University in Belgium between the years of 1978 and 1981, studying Religion and Church History. During this period Professor Andreas was asked in January 1977 by Archbishop Makarios III of Cyprus (1950–1977) to organize and open an Orthodox seminary for the Archdiocese of Irinoupolis under Archbishop Frumentios (Nasios) (1972–1981) at the neighborhood of Riruta in Nairobi, Kenya, thus introducing him to the Mission of East Africa. He went to Kenya as a layman professor to help establish the seminary in 1977, and stayed in this position until 1997.

In 1981 the Patriarchal Seminary of Archbishop Makarios III in Riruta was finally inaugurated, under His Beatitude Anastasios (Yannoulatos), then Bishop of Androusa (1972–1991), who was the new Vicar for East Africa following the repose of Archbishop Frumentios. At the request of Bishop Anastasios, Professor Andreas was joined in the following year by Professor and Archimandrite Jonah Lwanga, current Archbishop of Kampala, an Ugandan native that had studied Theology at the University of Athens. For more than ten years, Professor Andreas also participated, as a lay-theologian, in inter-ecclesiastical and inter-Orthodox conferences as well as with various religious organizations in the Middle East, representing the Orthodox presence in East Africa.

On July 19, 1992, Professor Andreas was tonsured a monk with the name Makarios and ordained a hierodeacon in the Church of Saint Nicholas in Riruta by Archbishop Petros I (Papapetrou) of Accra (1990–1994), later Patriarch of Alexandria (1997–2004), who succeeded Bishop Anastasios as Vicar of East Africa after his election to the restored Throne of Albania in 1991, persecuted by the Atheist regime of Albania since 1967.

In 1997, Archbishop Petros was elected Patriarch of Alexandria following the repose of Patriarch Parthenios. Three days after his election and under his recommendation, the Holy Synod elevated Bishop Jonah to Archbishop of Kampala. Patriarch Petros also asked His Grace Makarios to leave the ecclesiastical school in Riruta to be sent to Alexandria as Director of the Patriarchal Library, while Archimandrite Seraphim Kykkotis, another pupil of His Eminence Kallistos in Oxford, took over the missionary center of Riruta, being elected Archbishop of Kenya in the same year.

On September 13, 1998, His Grace Makarios was elected Archbishop of Zimbabwe and Exarch of Southern Africa by the Holy Synod at the indication of Patriarch Petros. His Eminence headed the Mission of Southern Africa, which at the time included the countries of Zimbabwe, Zambia, Angola, Mozambique, Botswana and Malawi, as well as representing the Church in many conferences. Today, Makarios, Jonah and Seraphim are the oldest living members of the Holy Synod in terms of episcopacy.

On November 24, 2015, Archbishop Makarios achieved the approval by the Holy Synod for the foundation of two dioceses under his omophorion, Nyeri in Mount Kenya and Kisumu in Western Kenya. The Archdiocese of Kenya was renamed as Archdiocese of Nairobi. Thus, His Eminence received this new title. He also attended the Council of Crete in 2016.

On October 9, 2019, His Eminence gained a third diocese: it was Eldoret, also in Western Kenya, but in a different missionary environment. It is worth mentioning that all the three dioceses were founded after extensive missionary efforts spanning over a decade of His Eminence's work as archbishop in Kenya.

Archbishop Makarios is a proficient linguist, speaking, in addition to his native Greek, English, French, Russian, Italian, as well as a number of African dialects. He has written extensively, primarily on past and current Ecclesiastical History of the ancient patriarchates, Cyprus, and Russia. While dean of the seminary of Riruta he initiated a program whereby the students translated the Orthodox services into more than fifteen African dialects. Thanks to his efforts, today Nairobi has also Orthodox schools for all ages and a health center in Riruta.

His Eminence has spoken that his missionary efforts are not proselytizing but done through invitations to the people to come to see what the Orthodox services are like and then make their decisions. He combines both the Greek language and the local dialect in his services.