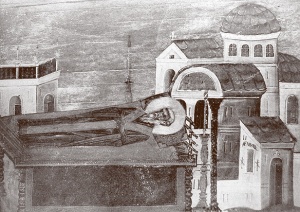 Proclus portrayed in the Menologion of Basil II

Proclus was the Archbishop of Constantinople from 434 to 446. He was a friend and disciple of St. John Chrysostom. He is remembered for his Tome of Proclus that peacefully mediated certain doctrinal disputes among the Eastern bishops. His feast day is celebrated on November 20.

The date of his birth in not known. While little is known of his early life, Proclus was was noted for his prayerful life and that he studied the Holy Scripture. He became a reader at an early age. He was a disciple of John Chrysostom and was ordained a deacon and priest by him. From the great saint, Proclus received a profound understanding of Holy Scripture and learned to present his thoughts in a polished form.

Proclus continued his preaching after Nestorius became Archbishop of Constantinople in 428. It was during one of these events, in 429, that Proclus preached his famous sermon on Incarnation and defended the title of the Theotokos before Nestorius himself. This sermon was later made part of the Acts of the Council of Ephesus, at which Nestorius was deposed.

After Abp. Maximian, who had succeeded Nestorius in 431, died in 434, Bp. Proclus was chosen, with the concurrence of the bishops of Constantinople and Emperor Theodosius II, to succeed him as the Archbishop of Constantinople. Abp. Proclus' ascent to the see of Constantinople was approved by Cyril of Alexandria and John of Antioch, in their responses to the synodical letters announcing Proclus' appointment.

In 436, a number of bishops from Armenia approached Proclus about the appropriateness of some propositions presented by Nestorians that had been attributed to Theodore of Mopsuestia. In response, Proclus issued his letter, now referred to as the Tome of Proclus, that he sent to the Eastern bishops, condemning the propositions, and requested their signatures. The bishops approved the "Tome" that did not mention Theodore whom the bishops admired. Abp. Proclus' mediating approach succeeded in calming down the Church and enabling the return of many Nestorians.

In 438, Abp. Proclus had the relics of St. John Chrysostom translated back to Constantinople from Comana and interred in the Church of the Apostles. This act reconciled the admirers of St. John who had separated themselves as a consequence of his unjust deposition as archbishop.

It was during the time of Proclus that the Trisagion came into use. This came about when the area of Bithynia, in Asia Minor, suffered a series of destructive earthquakes. By tradition, during a prayer service appealing to God a boy was seemingly snatched out of sight up into the air and then returned to earth after which he related that he saw the angels and God singing: "Holy God, Holy Mighty, Holy Immortal", that the people also began to sing, adding to it: "Have mercy on us." With this appeal the earthquakes came to an end. The prayer has continued as a part of the Divine Liturgy in the Church to this day.