Our father among the saints Cyril of Alexandria was the Pope of Alexandria at the time Alexandria was at its height in influence and power within the Roman Empire. Cyril wrote extensively and was a leading protagonist in the Christological controversies of the 4th and 5th centuries. He was a central figure in the Council of Ephesus in 431 which led to the deposition of Nestorius as Archbishop of Constantinople. Cyril is among the patristic fathers, and his reputation within the Orthodox Christian world has led to his acquiring the title "Seal of all the Fathers." His feast day is celebrated on June 9 and, with St. Athanasius of Alexandria, on January 18. 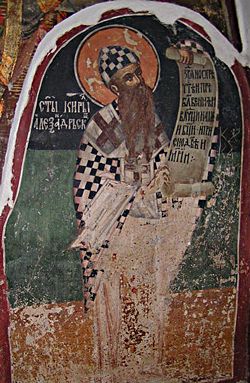 St. Cyril of Alexandria
Fresco at Râşca Monastery (Romania)
Cyril was born about 378 in the small town of Theodosios, Egypt, near modern day Malalla el Kobra. His mother's brother, Theophilus, was a priest who rose to the powerful position of Pope of Alexandria. His mother remained close to her brother and under his guidance Cyril was well educated. His education showed through his knowledge, in his writings, of Christian writers of his day, including Eusebius, Origen, Didymus, and writers of the Alexandrian church. He showed a knowledge of Latin through his extensive correspondence with the Bishop of Rome, Pope Celestine. His formal education appeared normal for his day: 390-392 grammatical studies at ages 12 to 14, 393-397 Rhetoric/Humanities at ages 15 to 20, and 398-402 Christian theology and biblical studies.

He was tonsured a reader by his uncle, Theophilus, in the Church of Alexandria and under his uncle's guidance advanced in knowledge and position. He supported his uncle in the removal of St. John Chrysostom as archbishop of Constantinople, although this was justified as an administrative, not doctrinal, issue, as later Cyril supported John's return as when he contrasted Nestorius' unorthodoxy to Chrysostom's purity of doctrine to the imperial court.

Theophilus died on October 15, 412, and Cyril was made pope on October 18, 412, over stiff opposition by the party for the incumbent Archdeacon Timothy in a volatile Alexandrian atmosphere. Thus, Cyril followed first Athanasius and then Theophilus as the Pope of Alexandria in the position that had become powerful and influential, rivaling that of the city Prefect.

His early years as pope were caught up in the problems of a cosmopolitan city where the animosities among the various Christian factions, Jews, and pagans brought frequent violence. In addition, there was the rivalry between Alexandria and Constantinople and a clash between Alexandrian and Antiochian schools of ecclesiastical reflection, piety, and discourse. These issues came to a head in 428 when the see of Constantinople became vacant. Nestorius, from the Antiochian party, was made Archbishop of Constantinople on April 10, 428, and stoked the fires by denouncing the use of the term Theotokos as not a proper rendition of Mary's position in relation to Christ.

Thus, Cyril and the Alexandrian party crossed swords with those of the Antiochian party in the imperial home court. After much in-fighting, Augusta Pulcheria, older sister of the Emperor Theodosius II, sided with Cyril against Nestorius. To rid himself of Cyril, Nestorius recommended to the emperor a council in Constantinople. But, when Theodosius called the council it was in Ephesus, an area friendly to Cyril. After months of manuevering the Council of 431 ended with Nestorius being removed from office and sent into exile.

Cyril died on June 27, 444, but the controversies were to continue for decades, from the Robber Council of Ephesus in 449 to the Council of Chalcedon in 451 and beyond.

As noted above, Cyril was a scholarly archbishop and a prolific writer. In the early years of his active life in the Church he wrote several exegeses. Among these were: Commentaries on the Old Testament, Thesaurus, Discourse Against Arians, Commentary on St. John's Gospel, and Dialogues on the Trinity. In 429 as the Christological controversies increased, his output of writings was that which his opponents could not match. His writings and his theology have remained central to tradition of the Fathers and to all Orthodox even up today.